Prima Illuminatus, Leader and Ruler of the Illuminati

Shadow Tyrant
Lucius DeBeers is the main antagonist of the Deus Ex franchise.

Lucius was born in Southern England, United Kingdom in the heart 1927. He had eventually grown up to be a member and soon leader of the secret society known as the Illuminati. He lead the Illuminati for many years and in 1963, he ordered the assassination of American President John F. Kennedy and his brother Robert in 1968 (Most likely the two were resisting or endangering the Illuminati), respectfully. He considered that Morgan Everett was to be his protégé bad made sure that he was. 100 years later in 2027, Lucius was both still alive and still running the Illuminati and the world from behind the scenes. He lived in a 15th century-styled house in Geneva, Switzerland and was forced to receive medicine from Dr. Roman, who heated but desperately needed his medicine in order to stay alive.

During the events of Deus Ex: Human Revolution, Lucius is mentioned throughout the game as he had e-mailed David Sarif of Sarif Industries of a needed request but Sarif told his executive assistant to block Lucius, despite the amount of money that he would promise. During this time however, his protégé in Paris is starting to see his weaknesses and is desperate the remain on top. He is also talking to seven people via hologram on how the Illuminati's plans are going.

He appeared as the main antagonist of the game.

Later in 2029, the Illuminati deploy Shadow Operatives to ambush an arms deal in Dubai. The Shadow Operatives surprise Task Force 29 (with Adam Jensen now in their ranks), who were there to intercept the deal. Afterwards, he holds a secret meeting using Neural SubNet to discuss recent and upcoming matters. The meeting is attended by the other members of the Council of Five, as well as Bob Page. During the meeting, he reminds the council that their long-term goal of maintaining order and stability has veered off-course as a result of the societal schism caused by the Aug Incident. DeBeers then demands that disruptive elements must be excised.

The Council proceeds to discuss the Human Restoration Act, which the United Nations is set to vote on soon. Volkard Rand, one of the Council members, states that he will go to New York to rally support for the passage of the Act. DeBeers agrees, and tells Stanton Dowd to accompany Rand. Rand, Dowd, and Elizabeth DuClare log off from the meeting, leaving DeBeers with Morgan Everett and Page. Everett argues that Rand and Dowd won't succeed in getting the Act to pass, and notes that Nathaniel Brown (the CEO of the Santeau Group, a corporation currently building a safe-haven for the augmented) is an unknown factor in this scenario. DeBeers acknowledges this, and tells Everett that they are already proceeding with the alternate strategy, later revealed to involve the orchestration of terrorist incidents intended to ensure the passage of the Human Restoration Act. Page tells DeBeers that everything is in place. In response, DeBeers tells Page that it is his chance to deliver. DeBeers remarks that "Dubai laid the foundations," suggesting that having Jensen's TF29 team witness the attack by the Shadow Operatives was part of the plan. At the end of the conversation, DeBeers instructs Page to proceed by activating the "sleeper cell," a group of agents embedded in the Augmented Rights Coalition. This group would later orchestrate the bombing of the Růžička Station in Prague and the assassination of ARC leader Talos Rucker. After Rucker is assassinated using the Orchid, Shadow Operatives acting under the instructions of Page attack Nathaniel Brown's Safe Harbour Convention held in London. The attack succeeds in framing ARC as a terrorist group, but the Human Restoration Act may or may not pass, depending on whether Jensen is able to prevent the assassination of Brown and the UN delegates attending the convention. If Jensen prevents the assassination, the HRA fails to pass.

At the end of the game, Delara Auzenne reports to DeBeers by secretly using Elizabeth DuClare's NSN device, telling him that Jensen is remarkably stable and that Jensen's memories are consistent with their objective. The conversation implies that there has been some alteration to Jensen's memories to assist the Illuminati in their attempt to find Janus, the head of Juggernaut Collective.

Sometime before Deus Ex, Lucius had been cryogenically frozen by Everett in order to stay alive and was kept inside Everett's house. He gave him a advice now that he was becoming the new leader of the Illuminati but Lucius was always suspicious about Bob Page. He was angry that Everett trusted him and he was proven right when in 2035, Page and Majestic-12 had launched a military coup and overthrew the Illuminati. This led to MJ12 gaining access and soon complete control over all of the Illuminati's resources and institutions, but also took over Europe and Asia and became the de facto rulers of the two continents. DeBeers was correct and we would spend the next seventeen years trying to remove Page from power and regain the Illuminati's control once more.

By 2052, (the year Deus Ex takes place), Lucius remains in his cryo pod but continues to be the de facto leader of the Illuminati as its current leader, Morgan Everett is still taking advice from him on how to effectively run the remnants of the Illuminati. Morgan had promised DeBeers that he would unfreeze him someday and would heal him to help him regain his rightful place as the Illuminati's leader. However, this is turned out to be a lie as Everett as no intention of doing it and has no resources for it. If the player finds out this information and discourse DeBeers hiding place, then JC Denton will reveal the information to him and will give the player the choice to either power down his pd and kill him, or leave it operational and keep him living. There is a message on a computer terminal in Area 51, which is an e-mail from DeBeers to Bob Page.

Lucius looks like a very old and weak person in the game. He is very frailly and looks like a fleshy skeleton as a result of failing health over the years and his age of 130. His full body is never shown as a result of the pod and it takes up most of his appearance. He's Caucasian.

Lucius seemed to be a very calm and collective person as he would continue to help out the Illuminati. He appears to be very dedicated and determined as he was able to have the Illuminati rise from the both Century to the height of its power in the 21st Century and had world leaders "eating out of his hands". He also acts as the de facto leader of the Illuminati and makes sure that everyone he meets is aware of that. 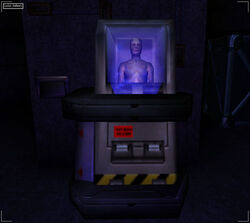 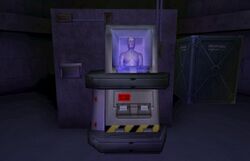 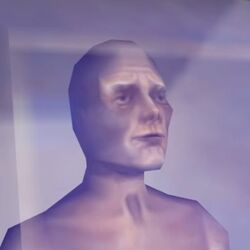 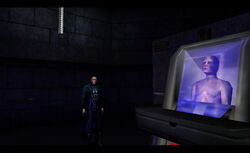 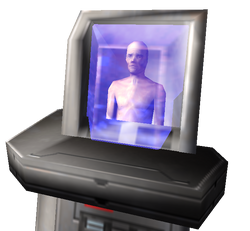 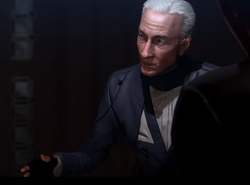 In Deus Ex: Mankind Divided
Add a photo to this gallery

Retrieved from "https://villains.fandom.com/wiki/Lucius_DeBeers?oldid=3555355"
Community content is available under CC-BY-SA unless otherwise noted.