Making everyone as miserable as possible.

He was voiced by Sean Cullen.

He hates and is disgusted by weavils because they pulled a prank on him and took his stuffed rabbit when he was young. He also dislikes anything that has to do with being fun and happy (unless it's fun and happy for him), this leads him to especially hate Jimmy since nothing ever seems to make him miserable. He doesn't get along with his father since he treated his son like Lucius does Beezy, and dislikes the rest of the family. While angry most of the time, Lucius really can't stand to lose at golf. When this happens, he ends up throwing a tantrum and having the entire course flooded. This has led to Samy helping him cheat, and his opponents letting him win. Also, when Heloise creates a new invention, he always takes credit for creating it.

Lucius has a holiday named "Lucius' Fools Day", on this day Lucius gets to spread even more misery through pranks. 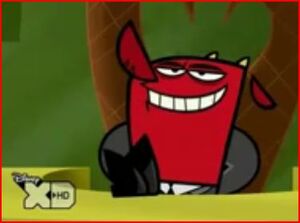 Retrieved from "https://villains.fandom.com/wiki/Lucius_Heinous_VII?oldid=4074919"
Community content is available under CC-BY-SA unless otherwise noted.