Playing with his teddy bears and other toys.

Doing chores around the mansion.

Kill his entire family and earn his false father's political power in order to take over the world for his true father Lucifer (succeeded in killing, but the rest was finally fulfilled in the sequel).

Kill his brother Isaac Gillmore whom threatened to hinder him from his original goal (succeeded).
Overthrow his father over the rule of Hell (succeeded).

Lucius Wagner is the titular protagonist villain of the 2012 psychological horror stealth video game Lucius and its sequels Lucius II: The Prophecy and Lucius III. He is the 6-year-old son of the Devil himself, wielding Satanic powers and destined to take control of the world.

Lucius was born in room 666 at the St. Benedict Hospital on the 6th of June, 1966. In the sixth year of his life growing up in a populated mansion under a wealthy family, Lucius decides to slaughter his entire family and their acquaintances in a year long murder spree after his father, Lucifer/Satan, tells him to do so.

Throughout the game, Lucius secretly murders the staff (including the maid, butler, mechanic, and personal teacher) and his family so he can unleash his Satanic powers and earn his false father's large wealth, which will give him enough political power to take over the world for his true father. Lucius was successful, and all of the killings were blamed on his false father after he was presumably murdered.

In spite of his success, he has some setback in his ambitions: where he ended up sent to St. Benedict Memorial Hospital by unsuspecting caretakers out of their belief that he was "traumatized" by mysterious death around him during the events of the first game.

Also, during his stay in the said hospital, Lucius receives no contact from Lucifer and his powers have mysteriously vanished since the last time he used them. Meanwhile, Detective McGuffin is visited by Lucifer who tells him that Lucius is his spawn required for the end of days and that he needs to protect him.

After six months in the hospital, Lucius suddenly gets the urge to attack a nun which makes the staff put him into shock therapy. When a doctor tries to zap him however, he regains his strength and powers which allows him to kill the doctors instantly.

While rampaging through the hospital, Lucius not only finds out his false father Charles survived his supposed death, but also discovers that he has a half-brother named Isaac Gilmore, who was out to fulfil the same Prophecy but would get in his way as only one of them meant to succeed. After murdering Charles and tying up some loose ends, Lucius and McGuffin travel to a small town called Ludlow for a fight that would determined who is the true Antichrist.

By the events of the third game, Lucius and McGuffin returned to Winter Hill to finish what they had started in enacting Biblical Apocalypse, unsealing the Sacred Scroll. However, it would be a tough due to both had to enact events figurative to ones in the Bible and meeting an opposition in form of Gabriel.

After enacting figurative events linked to Four Horsemen of Apocalypse and only two seals remained, McGuffin and Lucius had a heart-to-heart regarding whether Lucifer would rewarded them for their actions. Reviewing events in the previous game, McGuffin expressed his suspicion regarding Lucifer's true motive and the Prince of Darkness might only using them for his own gain, especially wuth the fact that he may not strong enough to enact Apocalypse by himself. Suddenly, McGuffin unceremoniously killed by Lucifer, who then abandoned him at the ravaged town.

Awakened in the ruins of his old house, Lucius meets Gabriel who directed him to Dagger of Destiny, the same weapon he used to kill his grandfather. Surprised that the dagger more important than it seemed, he took the weapon and confronted Lucifer in hell through the access at a mausoleum.

Arriving at Hell, Lucius attemoted to ambush his father with Dagger of Destiny, but the Prince of Darkness sensed his presence and cornered him, only for Gabriel, who actually an angel, saved his life bybstabbing the dagger on Satan's spine, killing him and render Hell devoid of its leader. With Lucifer gone, Gabriel revealed his intention to overthrow Heaven, but need Lucius' aid to do so. Whether Lucius would help him or backstabbed him and become the new ruler of Hell depends on the player's choice at this point.

As already shown in the game, Lucius tends to be an intelligent kid. Lucius started learning biology in the age of 6, he is portrayed to have an above-average intelligence in science, but seems to be only average in mathematics. Much to his father's nature, he's sensitive to crosses. Lucius never quite shows feelings of rage, fear or even panic. He's also very methodical, which makes it easier to kill someone and not being caught.

In the second game he gained two new abilities which replace his Mind Erase ability: 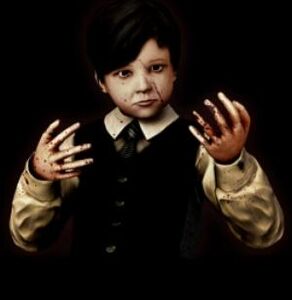 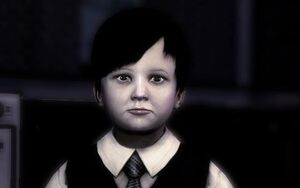 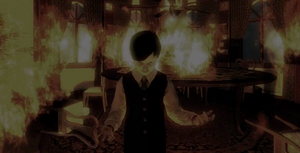 Retrieved from "https://villains.fandom.com/wiki/Lucius_Wagner?oldid=3703714"
Community content is available under CC-BY-SA unless otherwise noted.