Leader of the Joy Joy Gang

Continue being the one with luck by stopping the Mortals (succeeded)

He was voiced by Chris Jai Alex, who also voices Hangry the Pig, Joy Kill, and the Trigger Teddies.

Lucky is an anthropomorphic bunny with a purple bow tie. He has yellow fur with his muzzle, inner ears, and stomach being a lighter shade of yellow. Like one of his fellow animatronics, Penny The Chicken, he has four fingers on both of his hands. He also has large buck teeth and eyes.

When in his nightmare form, his eyes become metallic and red, and his teeth become more human-like.

At first, he seems to be a friendly mascot animatronic who is looking to make people joyful, but in reality, he is a very selfish and bloodthirsty robot looking to kill Doug. He is also proven to be egotistical, as he claims that the reason his name is Lucky is because he never loses. He also seems to take joy in hurting people, proven when he is laughing maniacally while beating Doug in one of his jumpscares. He also believes that everybody is a little crazy, claiming that "it's a mad, mad world".

In "Mascot Mayhem", he and Penny introduce themselves while "Joy Joy Ditty" plays in the background.

Afterward, they will be after the player. His ability, revealed in his music video "Bad Rabbit", is his own speed boost, which causes him to instantly glow red and chase down the player at an extremely fast pace. It is also confirmed that his speed boost ability would be RNG-based. Lucky also travels in the air on balloons, which he also has a ranged attack only in zone 1, where he can throw bombs at the player while they are collecting shards.

Lucky also relies on wall cameras throughout the level to locate where Doug is Doug uses the Vanish power to avoid getting detected by both the wall cameras as well as Lucky and the other animatronics.

After meeting hangry, lucky greets the player the moment they open either door at the start of zone 2 of Mascot mayhem. He goes on to mention that Hangry goes insane whenever he senses human ribs. Lucky will then skat on about the world being mad, before dashing for the nearest door and disappearing. Lucky and his clones will pursue the player when hangry or the cameras catch them, mad-dashing for the kill.

When the player collects all shards in zone 2 and approaches the breaker switch, the JJG will arrive to try and stop them. Lucky 'Unluckily' steps on sensitive wiring broken down by a hilariously oversighted water spill hazard, and is blasted with water discharge when the player turns on the breaker switch. He and the others stand inactive, but are hinted to still be able to see the player as penny and hangry creepily follow them with their eyes.

Albeit somewhat unsuprisingly, the JJG survives the electrical hazard, and returns to pursue the player. Lucky remarks the player with the query of "Missed me buddy?!".

Throughout zone 3, Lucky and his friends will chase down the player in a ambush, with only limited cameras, but small space to keep the player in their trajectory. When the player collects the last of the shards, malak is forced to chase them until they activate a reset button.

After activating a crusher, the JJG is crushed into small discombobulated pieces. This does not mark their complete ending however.

With malak to activate a special project of his, he reconstructs them into Joykill. Lucky Snarks at his incredible luck, and taunts the player with his resurrection. Hangry annoys him with his excitement about being able to eat more ribs with the upgraded body. Despite the players efforts, he destroys the crusher with ease, and leaves them to improvise. After being knocked into the steel magma, he returns and breaks through the timer, chasing them relentlessly.

With sheer luck, the player finally escapes the torment of joykill, but he does not give up easily. He stops them before they can escape, and a clone trio of JJG members proceed to angrily gang-bash the player. After malak marks doug, lucky orders hangry to toss the player back into the portal anyway.

A Lucky spawns from Malak's clone as a nightmare at seventh portal, Mascot Mayhem. He doesn't do anything except just stand there during the cutscene.

It has been confirmed by the producer that Joy Joy Gang will appear again in Chapter 5 against Doug. It's currently unknown what they will do. 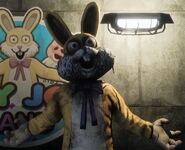 An army of Lucky clones. 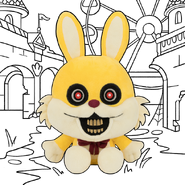