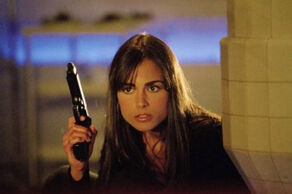 Lucy Diamond is the main antagonist-turned-deuteragonist in the 2004 film D.E.B.S. She was portrayed by Jordana Brewster.

In the beginning of the movie, we see Lucy on a date with Ninotchka, a Russian assassin. The date ends shortly by a lot of people trying to take down others.

Later, one of the D.E.B.S., Amy Bradshaw, is assigned to do a research paper of someone and she decided to write one on Lucy, whom she had to confront and arrest. As a spy, Amy had a duty to the D.E.B.S team to do so, but she couldn't.

Eventually, Amy and Lucy hang out and discuss certain things such as what Lucy wanted to be instead of a jewel thief. Lucy didn't realize that pirates are also criminals.

Little to Amy's knowledge, she begins to fall in love with Lucy and eventually the two are found in bed together and teammate Max tells Lucy that if she hurts her, she will kill her, giving her her blessings even though Amy was sleeping with the enemy.

Retrieved from "https://villains.fandom.com/wiki/Lucy_Diamond?oldid=3540609"
Community content is available under CC-BY-SA unless otherwise noted.