Plotting her rise to power.

Kidnap Prince Ivan and usurp his throne (succeeded temporarily) in order to become empress of all of Russia.

Kill Bartok and any other witnesses of her crimes (both failed).

Ludmilla is the main antagonist in Don Bluth's 1999 animated fantasy film Bartok the Magnificent. She is the former trusted advisor of Prince Ivan Romanov who wishes to take the throne herself and become queen of Russia.

She was voiced by Catherine O'Hara, who also played Duchess Rowena in Barbie in the 12 Dancing Princesses, Shock in The Nightmare Before Christmas, and Kaos' Mom in Skylanders: SWAP Force. While in her dragon form, her vocal sound effects were provided by Frank Welker, who also did the sound effects of Max 3000 in Man's Best Friend, Green Death in How to Train Your Dragon, Rudy in Ice Age; Dawn of the Dinosaurs, Mor'du in Brave, Harvesters in Indenpendance Day, Sharptooth in The Land Before Time and Sabor in Tarzan.

Ludmilla is best described as vain, ambitious, manipulative, selfish, decietful, devious and short-tempered. She is completely full of herself and believes a beautiful woman deserves the throne instead of the young Prince Ivan. She also sees Bartok as nothing but a nusaince.  Ludmilla is extremely sly as she was able to kidnap Ivan and frame Baba Yaga for it, then send Bartok on a fool's errand to "rescue" Ivan, just to get the bat out of the picture.  She also has no patience when her henchman Vol misunderstands her orders and locks him up along with the heroes for his failure.  All in all, Ludmilla's supreme vanity proves to be her undoing when she drinks the magic potion believing she's as beautiful as a flower, only to instead transform into a dragon, which eventually leads to her downfall.

From the beginning, Ludmilla seems to be a woman of rights, and also seems to be a little shy, hesitant and mysterious. She planned the kidnapping of the young Russian monarch named Prince Ivan and seemed to use Bartok's help to dispose of this singular bat, putting the witch by the name of "Baba Yaga" as the main enemy and the kidnapper of Prince Ivan.

Bartok goes to Baba Yaga's house in the Forest of Iron. As he does three tasks for Baba Yaga, the mystical witch makes a potion for Bartok. Once the potion is finished, she shows to Bartok the place where Prince Ivan is and that she did not kidnap him — in fact, he never even left the castle. The magic potion was made to help out Bartok. Its mystical powers apparently make the drinker be what he is inside on the outside ten times.

Bartok goes to the Castle of Prince Ivan (now Ludmilla's) and claims that Prince Ivan was never kidnapped. He tells her "He is in the TOWER!". Ludmilla is surprised and confident, so she goes with Bartok to the tower, where Ivan was being held. Ludmilla snaps at her minion Vol, stating that she told him to "get Ivan out of the way". Vol retorts that he did just that, by locking the prince in the tower. Exasperated by her henchman's cluelessness, Ludmilla furiously screams to Vol that she meant kill the prince. She then places Vol along with Bartok and Ivan (again) in the prison. WIth nothing else in her way, Ludmilla snatches the potion from Bartok and drinks it as she leaves.

She believes that (be what she will be on the inside on the outside ten times) she is more than a beautiful woman, thinking that inside she is as "lovely as a flower". However, while she sings "The Real Ludmilla", she was instead gradually becoming a giant, fat and hideous purple dragon as she gets bigger and fatter while she loses all of her clothing. As she attempts to speak to her people, they flee in terror at the sight of her dragon form. Ludmilla accidentally breathes fire and she finally sees herself as a dragon from her reflection on the polished floor. At that moment, she completely loses her human consciousness and her ability to speak as she becomes a violent monster, thus completing her dragon transformation. She flies into a rage and breaks out of the palace, intent on destroying the kingdom.

Once Bartok escapes from the tower, he goes against Ludmilla to save the kingdom. She was not happy with that and chased him through town while breathing fire. Her scales made it impossible for Bartok to fight her physically, so he catapulted a large rock into her mouth to stop the flames, dazing her. She was then hypnotized (by watching different sized rocks being juggled) by Bartok and was led to the tower as part of his plan to use the water within to put out the town's fires. Ludmilla was tricked into breaking the rock loose in the tower and chased Bartok upward onto it in order to kill him, but the tiny bat was able to trick her into shifting her weight from atop the tallest point. Ludmilla soon plummeted along with the collapsing tower and was crushed to death under debris, dying from the impact. 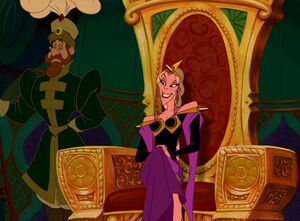 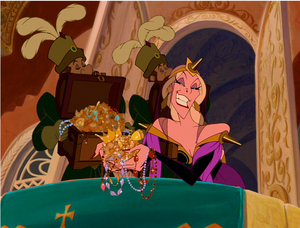 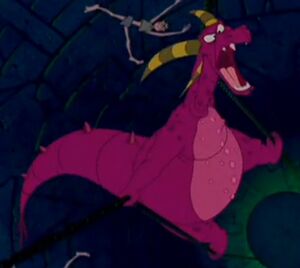 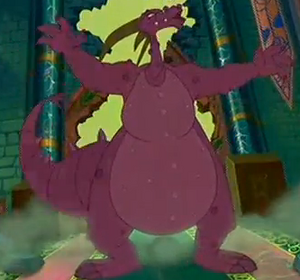 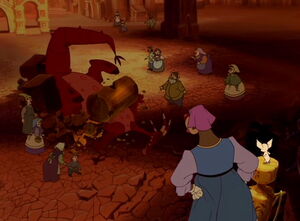 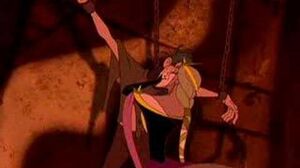