Hunter for the Healing Church (formerly)

Ludwig is a major antagonist and boss in the Bloodborne DLC The Old Hunters. He was a hunter of the Healing Church who, after being consumed by the scourge of the beast, became a monster. Now trapped in the Hunter's Nightmare, the now-named Ludwig the Accursed wanders in search of blood.

He was voiced by Des McAleer.

Ludwig's lower body is thin, apparently flayed and sports four asymmetrical but strong hoofed legs, while his upper torso is a portrait of pure madness: between two long arms protrudes a disproportionate hunch that shows a circular maw lined inside with irregular teeth and clusters of eyes, and his face; apparently blind from the right eye, is a melted visage of wrinkled skin and crooked teeth, stretched over an elongated head vaguely resembling that of a horse.

Despite seemingly being respected, Ludwig had his detractors who appear to have disagreed with his methods and not appreciated his hunters. These detractors dismissed Ludwig as a "beast-possessed degenerate", and Ludwig suffered much denigration at their hands.

At some point, the hunt took its toll and would soon transform into a beast. Given the shape of his beastly form, it is very likely that Ludwig dabbled in experimental forms of old blood, the Church's experiments the cause of some of the more monstrous creations like the Cleric Beast and Vicar Amelia.

Due to his bloodlust, Ludwig was banished after death to the Hunter's Nightmare - a Hellish mockery of Yharnam made by Kos/Kosm for anyone who becomes drunk with blood - where he remained ever since.

The player finds Ludwig at the very end of a channel of blood and corpses with Ludwig intending on killing him/her. Halfway through the battle, Ludwig regains some semblance of humanity when he gazes at the Holy Moonlight Sword, and continues the fight with his sword.

After the player defeats him, Ludwig is left just a decapitated head. If the hunter approaches him wearing regular hunter clothes, he asks the player if they have seen "the thread of light" and then wails incoherently. If the player approaches him in Healing Church uniform, he asks if the Church Hunters kept to their valorous purpose. If the player answers no, he falls into despair and wails incoherently. If they answer yes, he finds relief in the idea that his sacrifices were not in vain and passes out, leaving the Holy Moonlight Sword for the player.

Later, if the player chose not to kill Ludwig, Simon the Harrowed will shoot the beast through the eye with an arrow and put the beast out of his misery.

When the Hunter defeats the Orphan of Kos and lifts the curse, it is likely that Ludwig has been finally put to rest. 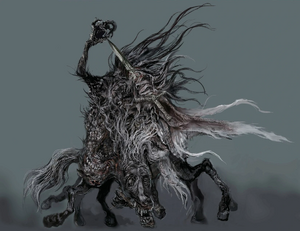 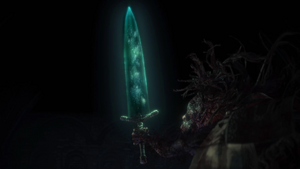 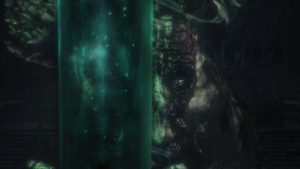 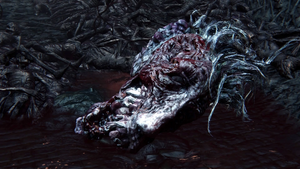 Ludwig's head.
Add a photo to this gallery 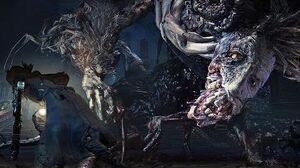 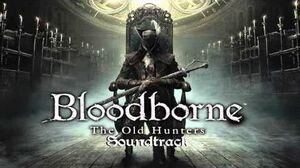 Retrieved from "https://villains.fandom.com/wiki/Ludwig_(Bloodborne)?oldid=3831986"
Community content is available under CC-BY-SA unless otherwise noted.