Observing visitors from atop his zeppelin.

Kill anyone who enters CarnEvil (succeeded until death).

Take over the world so he can twist it into his own personal "carnival".
Take the protagonist's brain for his experiments.
Kill the protagonist (all failed).

He was voiced by Jack E. Haeger.

After the player (or players, depending on whether one or two people play) manage to get through the first three areas (Haunted House, Rickety Town and Freak Show), they will gain access to the main area, the Big Top.

After surviving his onslaught of killer clowns, mimes, poodles and clown doctors (where it's revealed that he has planned to put the protagonist's brain into a gorilla), he reveals himself and sends his flunky Umlaut to take care of him.

When Umlaut dies, the player chases Ludwig around his airship, miles above the carnival, while avoiding his gunshots and skeleton soldiers. Eventually the player corners him at the end of the airship, where he resorts to tossing bombs and shooting fireworks. After enough damage has been dealt, Ludwig falls into the blades of the ship, chopping him to bits and causing the airship to explode.

Though presumed dead at first, the game's protagonist reinserts the token. Presumably, he is brought back to life. 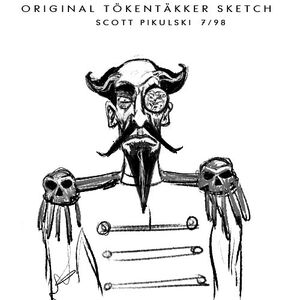 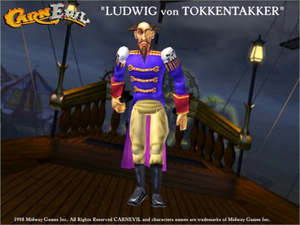 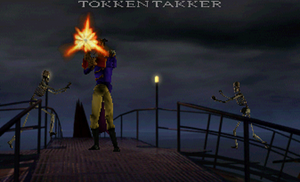 Ludwig welcoming the player to CarnEvil.
Add a photo to this gallery

Retrieved from "https://villains.fandom.com/wiki/Ludwig_von_Tökkentäkker?oldid=4273368"
Community content is available under CC-BY-SA unless otherwise noted.