Destroy as many planets and living beings living there as possible (mostly succeeded until death).

It was said long before arriving to Lyrica's home planet, Luganoger was known throughout the cosmos that it has destroyed either several or numerous planets more just for the sole sake of its amusement. While not much of its origin was made but has a clear awareness but chose to do what it could.

Upon arriving to Lyrica's home planet, it began firing and destroying all of life there. As Lyrica fled away in tragedy, Luganoger ultimately destroyed the planet as it burns within the fiery explosions. Upon noticing Lyrica survived, it travelled all the way from its recently destroyed victim to reach Earth of finding her and destroy it for its killings next.

As Lyrica became aware of its presences, it sent a signal message via analysis, telling DASH the horrific nature of Luganoger and the monster itself heading to Earth, upon being discovered it destroyed the satellite and made its arrival to Earth. While and before arriving, Lyrica warns Kaito/Max about Luganoger before fighting it.

As Ultraman Max appeared before Luganoger could begin killing the camp side's children while being attacked by Team DASH, he began fighting the evil creature within the forest until it had the upper advantage of stinging Max in a torturous way, attempting to absorb his energy until Max launched the missile it deflected back at it before using the Max Galaxy to end the monster and its rapid planet-destroying spree for good.

Luganoger is portrayed as a sadistic, heartless, and violent monster that destroys any living being along with their home planets for the sake of its own amusement.

Unlike most Kaiju, its aware of its actions, as a message from a signal DASH analyzed to be Luganoger's exact description from Lyrica and if one can look closely to its expression upon arriving on the latter's home planet, it was smiling under sadistic glee, stated that it openly admitted about its atrocities. In addition, it is the most evil and depraved monster Max has ever faced, not to mention it was a merciless destroyer across the galaxy's numerous planets. 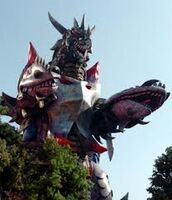