Lugosi is an anti-villain and one of the supporting characters of Bunnicula.

He is voiced by Richard Steven Horvitz, who also played Zim in Invader Zim, Kaos in the Skylanders franchise, Sheshou in Mulan (1998 Version), Crayon Boy in Codename: Kids Next Door, and Moxxie in Helluva Boss.

He was deformed and insane guinea pig obsessed with serving Bunnicula, but his way of doing so makes him an enemy. He is later adopted by Marsha, who he declares his new master.

In "Sunday Bunnday", he and Hole of the Unworthy brief appears, they dances together.

In "Pranks for the Memories",

In "On Mina’s Secret Service", Harold & Chester rescue Bunnicula from Treegor, who have trapped him in his tree. Lugosi is being arrested by Harold.

In "Cellarmander", When Mina have flooded basement, a Cellarmander eats them one by one. Together, Harold, Chester, Patches, and the Mumkey must rescue Bunnicula when he is eaten, Lugosi tried to save his master but caught eaten by Cellarmander. Later it's turned out that Cellarmander never eaten anyone but to save them from flooded.

In "Beach Blanket Bunn", he and others have adventures at Beach. 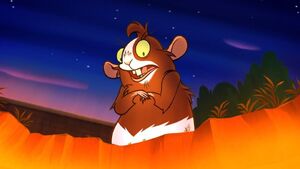 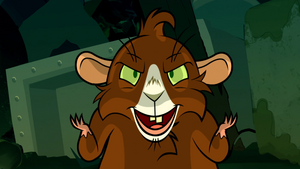 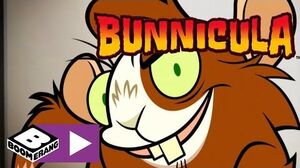 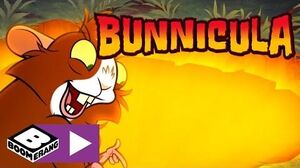 Retrieved from "https://villains.fandom.com/wiki/Lugosi?oldid=4285063"
Community content is available under CC-BY-SA unless otherwise noted.