Betray the CIA to get paid more from the KGB (succeeded).

Lukas Richter is a minor antagonist in the 2020 video game Call of Duty: Black Ops Cold War. He is a CIA asset turned mole for the KGB, who betrays Greta Keller, Russell Adler and his team when they go on operation to get more information on "Perseus" from Russian mafia boss Anton Volkov.

He was voiced by Jeff Skubal.

Lukas Richter was born on September 22nd, 1947 in East Berlin, Germany, two years after Germany's defeat in World War II. Richter would go to become an asset for the Central Intelligence Agency, and became an informant for BND asset Greta Keller. By the late 1970s or the early 1980s, Richter would become a mole for the KGB, seeing that the agency paid more than the CIA.

Before Russell Adler and his team entered East Berlin, Richter was monitoring a nearby KGB and was picked up by the Stasi security service during a sweep. The Stasi then gave him to the KGB, who proceeded to torture him for information while the Stasi and police increased security and checked everyone for more spies. Richter eventually broke from torture and revealed that he was working with the KGB and the identities of people in East Berlin who were assets for the CIA, stating to the Stasi officer Hans Weber that he was playing the "Americans for fools".

Keller informed CIA agent "Bell" that Richter was captured by the Stasi, and informs them to either rescue or silence her informant since he won't survive torture long enough. If the player decides to find Richter, they will eliminate three Stasi guards and find Lukas tied to chair. "Bell" can ask Richter questions about the document, and he will like that he's not working for the KGB and state that he has children to plea with "Bell".

If the player decides to execute him, he will plead for his life before being shot by "Bell". If the player rescues Richter, he will thank them and either stay in the room or leave and evade the Stasi guards who are searching everyone on the streets. If chosen to live, Richter will be seen alongside Russian mob boss Anton Volkov and ex-Stasi officer Franz Kraus after "Bell" and Keller are captured. Keller will insult Richter for his treachery, but Lukas defends himself, telling her that the KGB pays him more. When Adler, Helen Park, and Lazar Azoulay come to rescue "Bell" and Keller, Richter flees the scene and manages to escape.

Richter managed to regroup with the KGB in Moscow, seeking sanctuary from his former allies, and is taken to the Lubyanka Building to be debriefed by his handler for another assignment. A document from an KGB officer named Shostakovich states in Richter's computer file that he could possibly betray them just like his did the CIA, and that he doesn't know if Richter is motivated by ideology or from profit. Another file gives more information on Ricther, and states that he could possibly be an asset to an unnamed KGB individual (possibly "Perseus"). The player has the option of eliminating Richter or just leaving him alive during the mission "Desperate Measures", where the player breaks into the KGB headquarters. If the player decides to eliminate Richter, Dimitri Belikov will place Lukas in a chokehold before snapping his neck and placing his body in a closet. 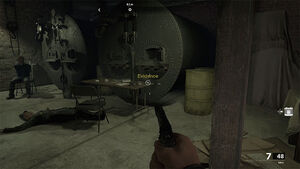 Richter being saved by Bell (player-determined). 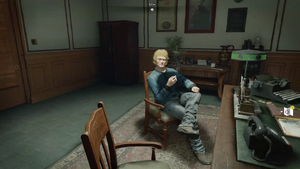 Richter in the KGB headquarters (player-determined).