Play the cursed song to kill all the guildmasters (failed).

Lullaby is a monster featured in anime and manga series Fairy Tail, which the latter is the final antagonist of the Lullaby arc.

Lullaby is an Etherious, one of Zeref's evil creations from the Books of Zeref and a Living Magic spell, which it was nicknamed Mass Murder Curse Magic, which would kill anyone who hears its melody.

Lullaby has two forms and thus, two appearances. It has it's initial and default Flute Form and it's Demon Form.

While in flute form it can't speak or move and its size is nearly 50 centimeters in length. It is probably made of wood and it has a skull with three eyes on one end. There is an oval-like cutout in the skull's brow. On the other end there are root-like cutouts.

When the flute transforms into its demon form. It becomes an extremely tall beast that has three eyes, two legs, two arms and one head. There are many cutouts in its body.

The flute was once just a tool for "murder by curse" at first, which means that it curses the target and causes them to die. After getting into Dark Mage Zeref's hands, he further developed it into a magical flute, called "Mass Murder Curse Magic" that is capable of putting a death curse on everyone who hears its melody except for the Caster.

Erigor of the Eisenwald Guild attempted to use its song to kill all the Guild Masters, but was defeated by Natsu. Kageyama tried to use it to kill the Guild Masters, but Makarov convinced him not to. Then Lullaby took its true form, a giant wooden demon, who intended to devour the wizards' souls, but Natsu, Gray, and Erza attacked it, and the resulting holes they left in it prevented its sound magic from working (as it is a flute). After some attacks from Gray and Erza, Natsu used Fire Dragon's Brilliant Flame to destroy Lullaby's demon form, reverting it to a flute. The lights in its eyes faded away and its face cracked, eternally broken. It currently is in the Council’s hands.

Sound Magic: Lullaby has the ability, while in flute form, to be played. When it is played, it produces a song that, if heard, will cause everyone, except for the caster, to die.

Magic Beam: While in its Demon form, Lullaby is able to fire a magical beam from its mouth through a Magic Seal that is powerful enough to destroy an entire mountain in a single shot and the magnitude of such attack is enough to scare a battalion of the Fiore Royal Army into a full retreat.

Demon Form: Lullaby has the ability to transform into a large beast with three red eyes, two arms, two legs, and one head. Various cutouts are also seen from its body. 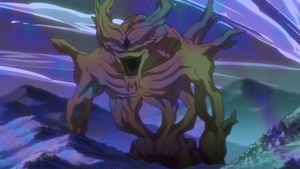 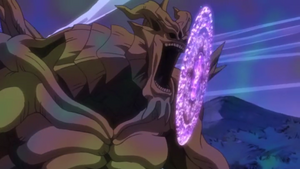 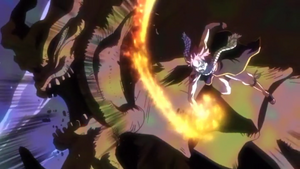 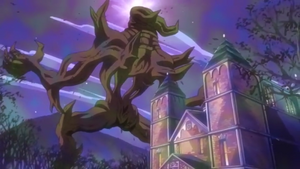 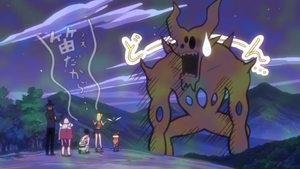 Retrieved from "https://villains.fandom.com/wiki/Lullaby?oldid=4127321"
Community content is available under CC-BY-SA unless otherwise noted.