Lulu Bell is a major antagonist in the anime/manga series D.Gray Man. is the twelfth disciple of the Noah's Family, and her Noah name is Rasutoru, she represent the lust of Noah. She makes her first appearance much later in the manga than in the anime, where there are two arcs with her as the main antagonist.

She is voiced by Arisa Orgasawara in the Japanese version of the anime, and Monica Rial in the English dubbed version.

Lulu Bell appears like an charming but cold-hearted and emotionless young woman with French origins. She has a quiet and calm personality that, contrary to the other Noah's family disciples,makes her prefer to study and observe in the shadows her opponents,before attack them directly.

She appears like an elegant and refined woman and at the same time a skillful and cruel strategist that has no problem sacrificing her akuma to complete her mission. She also shows an absolute devotion to the Millenium Earl, calling him master

In her human's form she appears like a beautiful woman with long, blond hairs tied with a purple ribbon,she always wears dark shades and her eyes are rarely open; when they are, she is extremely serious. She is often seen wearing a black suit with a blue tie and high-heeled boots.

In her Noah's form her skin and her hairs turned into dark and on her front appears the typical stigmata of the Noah's family.

Lulu Bell presents all typical powers of the Noah's family, as the control on the Akuma, the immortality and the Family's empathy, but as the Lust of Noah she has the ability of take on all the forms that she wants.

In particular, during her assault to the black order, she take the form of the Oceania branch head for infiltrated into the Order and assume the form of a giant water monster to fight the four exorcists generals and protect the Akuma's Egg.

for close combat she change her arms into tentacles with a spade-shaped blade on the end used for wrap, grab and hit her opponents and ,for hide her presence,she can also take the form of a Black cat with her purple ribbon surrounding her neck (only in the anime).

In the anime Lulu Bell makes her first appearance in the episode 40, where she, during the mission of Allen Walker, Linalee lee, Lavi and Aleister Crowley in order to find Marian Cross, send a group akuma in a small village of the Rosey Valley in Bulgaria for attack them. The exorcists defeat the akuma army and Lulu Bell is see to observe them in secret on a campanile with a binoculars before changes herself into a black cat and leave. After these events Allen Walker and the other move in the Bosphorus gulf in Turkey, and Lulu Bell pretends to be the proprietary of a hotel, hosting them for the night. When they go to bed the akumas attack and destroy the hotel, and when the group doesn't see Lulu Bell after the attack, believing she is really a human, search for her. Lulu Bell after leaves the hotel, gives orders to her akuma servant Mimi, making herself to find by the exorcist and acting as lure while the akumas, lead by Mimi, attack the group. During the assault, she reveal herself to Allen Walker as a Noha's family member before leaving. when Allen and his friends depart for go in Asia, Lulu Bell observe them from faraway, saying that she will follow them.

Lulu Bell as a cat (only in the anime). 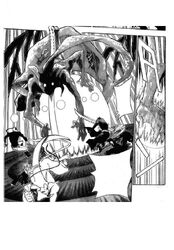 Lulu Bell in her water form.
Add a photo to this gallery
Retrieved from "https://villains.fandom.com/wiki/Lulu_Bell?oldid=3550050"
Community content is available under CC-BY-SA unless otherwise noted.