To exact revenge on Northwest for breaking his promise (failed).

Force the Northwest family to uphold their end of the bargain (succeeded).

Archibald Corduroy, also known as the Lumberjack Ghost and the Ghost of Northwest Manor, is a minor antagonist of the Disney animated series Gravity Falls, appearing in the episode episode "Northwest Mansion Mystery". He was a lumberjack who helped build the Northwest Manor and later swore vengeance after being betrayed by the Northwest family.

When he was alive, Archibald was a burly man wearing boots, overalls and a plaid shirt and sported thick facial hair but no hair on the top of his head. He also wore a black hat and bow tie when he attempted to attend at the Northwest's party, but discarded them when he was denied entry.

He retained this appearance upon becoming a ghost, but now his skin is dead grey, his bones showed from a hole on his torso and left leg, he is missing his right eye, his hair was made up of ghostly blue fire and the axe that killed him was still stuck to his head.

As a human, he was quite humble, hardworking, and trusting of others. That all changed when the Nathaniel Northwest went back on his word to allow him and the townsfolk into his new mansion. He became consumed with an intense rage and hatred that allowed his soul to return to the mortal world and wreak havoc on the Northwest family and all their guests. Not even young children like Pacifica were spared from his murderous wrath. He was sympathetic to Dipper, who was also manipulated by the Northwests into doing their dirty work, but that wasn't enough to prevent him from turning him to wood as well. However, when Pacifica finally fulfilled her family's promise and allowed the townsfolk into the party, the rage that had filled him for more than a century dissipates and he finally passes on.

He seemed to have been quite strong and a talented lumberjack when he was alive.

As a ghost, he has many unearthly abilities, like levitating himself and objects, animating stuffed animals, fire manipulation, weapon generation, plant manipulation and turning living beings into wood. His only weaknesses are silver mirrors which can entrap him and the happiness he felt when the promise made to him was fulfilled.

The ghost was originally Archibald Corduroy, a lumberjack and construction worker who, 150 years before the events of the episode, was one of many lumberjacks who agreed to help build the Northwest mansion. Nathaniel Northwest had promised them that their contribution would be a service to the town, in the form of a grand annual party for the rich and common folk to share (presumably this promise was made in lieu of actual payment). The work took many years and many of Archibald's fellow workers died in its construction, but eventually the mansion was complete. However, when he and the others returned to the mansion all gussied up to celebrate at the party promised, Nathaniel stopped them. Then he and his wife simply laughed at them and shut the gates in front of them, showing that the Northwests had never intended on ever allowing commoners inside their new home, nor living up to their promise of doing so.

This saddened Archibald and his friends, which was signified by a sudden rainstorm. But while the others chose to leave in disappointment, Archibald angrily refused to accept that he and his people toiled away and gave up so much for nothing. He threw his hat to the ground and banged at the gates, furiously demanding that the Northwests honor their promise. As rain began to pick up on the mountainside, an unforeseen consequence of his labor occurred, adding injury to insult. With the trees gone, the soil surrounding the mansion was loosened and an enormous mudslide swept Archibald away. As the Northwests and their guests partied away the night, Archibald held onto a stump for dear life, like a man overboard in a storming ocean. He then looked over and, to his utter shock and horror, an axe was sent flying from a log that hit a rock towards him and pierced his forehead, mortally wounding him at the very foot of the mansion he and his fellows had built. With his dying breath, Archibald swore a curse on the Northwest family: if they hadn't fulfilled their promise to let the common folk into their party within the next 150 years, his spirit would return and wreak his vengeance on their descendants and anyone else within their home.

Nathaniel apparently heard this chant from his attic and wrote it down on a piece of paper, which was passed down through generations of the Northwests as a means of warning them of the curse. But despite believing in the curse and knowing how to lift it, they continued to disallow any of the townsfolk into the mansion, for they considered their reputation far more important than even their very lives or those of their guests.

Upon the eve of the annual party, after one and a half century had passed since Archibald Corduroy's demise, the Lumberjack Ghost began his attack on the Northwests by causing their possessions to fly around. The current patriarch of the family, Preston Northwest foresaw this event, but instead of adhering to the ghost's demands, he instead forced his daughter Pacifica to trick Dipper Pines (then a minor local celebrity for his many victories over the forces of the macabre) into getting rid of the ghost in order to avoid ghostly justice.

Pacifica leads Dipper to the source of the disturbance: a private study with a fireplace, several animal heads and a portrait of Archibald Corduroy himself. At first, Dipper believes that it is just a minor ghost playing harmless tricks and that a bottle of anointed water will disperse it, but as he investigates the area, the man in the picture vanishes, the animal heads began bleeding and chanting, the furniture starts flying around and the bottle shatters, showing that this ghost was anything but minor. The ghost himself then materializes straight out of the fireplace, starting with a skeleton with an axe lodged in its skull, then flesh and clothes form around it, and lastly grows a beard made out of ghostly blue flame. Smelling the blood of a Northwest, the Lumberjack Ghost summons an axe and starts searching for Pacifica. Upon finding them, he chases them throughout the house until they fall into a secret room. The ghost ambushes them and attempts to kill Pacifica, but Dipper entraps him in a silver mirror.

The Northwests thank Dipper for getting rid of the ghost, but as he leaves, the ghost laughs at him and reveals his past and motivations behind attacking the family, and that Dipper was merely a pawn just as he once was. Furious at the Northwests for their deception, but knowing the ghost was too unstable to let free, Dipper began the exorcism process. Failing to convince Dipper into setting him free so that they could both have revenge on the Northwest family, the ghost tricked him into letting him look at the trees one last time. Drawing power from within the mirror, the ghost used his flaming beard to heat up the mirror's metal frame, forcing Dipper to drop it. Upon hitting the ground, the mirror shattered and ghost was released, allowing his revenge to be completed.

He then returned to the party and attacked everyone inside, bringing taxidermy animals to life and transforming all the guests into wood, as well as causing trees and plants to grow wildly in the mansion. The ghost exclaims to them that the only way to stop him is for a Northwest to fulfill their family's promise to open the gates for everyone to enter. Hearing this, Dipper finds Pacifica in the secret room, where she reveals the Northwests' long legacy of deceit and betrayal, as well as her remorse for tricking Dipper. Seeing this, Dipper encourages her to prove herself different from the rest of her clan. He then goes to confront the ghost himeself, but this time the ghost overpowers and turns him into wood as well. Once all the guests were turned to wood and the mansion reclaimed by nature (described by the ghost as a "Forest of Death"), he then began the final step of his plan; to set the mansion and the "Forest" ablaze and burn everyone to death. However, spurred by Dipper's sacrifice, Pacifica defied her parents and opened the gates to mansion, finally letting commoners into the party for the first time in 150 years.

With Pacifica having finally fulfilled the promise of her ancestors, the curse was finally broken and guests and mansion were returned to normal. The Lumberjack Ghost was overcome with joy as his work is finally done. Thanking Pacifica for doing the right thing, he acknowledged that she was unlike the rest of her petty and selfish family and states that he feels 'lumber justice'. The ghost happily passes away to a peaceful afterlife, leaving only the axe that was in his head. 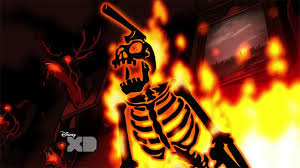 The ghost in his skeletal form. 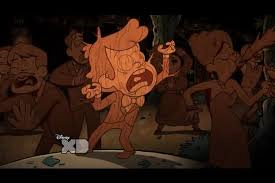 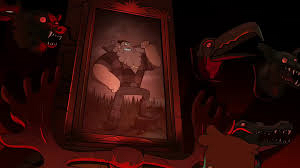 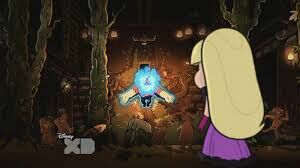 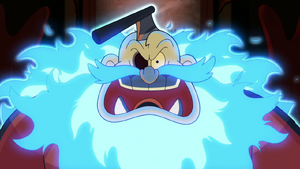