The Illuminati
The Seagull, The Crab, and The Pelican

Hegemonic Cult Leader
Lumino is a semi-one-time character from the DC Universe original series Teen Titans Go!, only appearing in the episode "Master Detective". He is a giant cult leader of The Illuminati. His secret identity is a Seagull, a Crab, and a Pelican, all of which have appeared in previous episodes.

He was voiced by Greg Cipes.

The titans got suspicious about the rock animals that sat outside of the Titans Tower. They remembered how every season, a new animal would sit on the rock, outside of the tower. In season one, the Seagull occupied the rock, in season two it was a Crab, and in season three it was a Pelican. Currently, in season four, the rock was occupied by an Octopus, who they brought in for interrogation.

The Octopus had no idea what happened to the previous three rock animals but then Robin found out that if you push the spots on its head together, it resembles a triangle, leading him to believe that the person behind all of this was the Illuminati and so he and the Titans set out on a search to uncover the Illuminati's secret hideout.

The Teen Titans finally uncovered the Illuminati's secret hiding place, where they were approached by a giant blue figure named Lumino. Lumino said that he knew that it was only a matter of time before Robin, the master detective uncovered his secret plans, so he thought he might as well reveal himself to him and introduce himself properly. He began to tell him everything about his plan.

Lumino started to tell the Titans about how he took control of the banks before he got cut off by Robin, saying that he didn't care about that. All he cared about was the rock animals. Confused, Lumino asked him what he was talking about and Beast Boy continued to pump him for information. Lumino brushed this off as complete silliness that he had no time for. Robin thought he was just playing dumb, so he and the other Titans sprung into action and started fighting him.

The action-packed battle featured Lumino using a series of Illuminati and conspiracy-themed attacks on the Teen Titans before his opposers finally won and tied him up. Robin interrogated him one last time, but Lumino insisted that he knows nothing about the animals. He did, however, say that he would pull the plug on any other evil plan they've got going on. Robin thought he was telling the truth and he and the other Titans sadly left, assuming he had failed his master detective adventure.

After the Titans left, Lumino revealed that he actually was the one behind the strange pattern of the rock animals coming and going as he revealed himself to be the Seagull, Crab, and Pelican all operating him from the inside. The Seagull laughed maniacally before the Octopus came by, snatched them with his tentacles, and devoured all three of them whole, officially defeating the Illuminati. 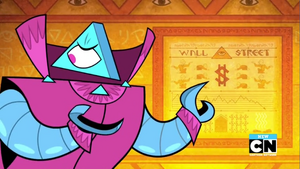 Lumino explaining his secret evil plan to take over the world, by taking control of all the banks, so that he can be in charge of all the worlds money. 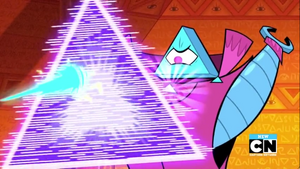 Lumino using his conspiracy cover up. 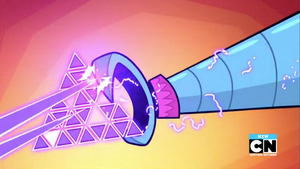 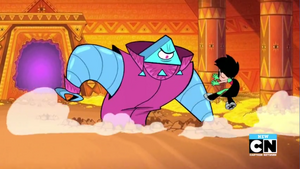 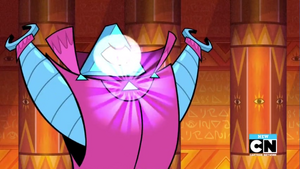 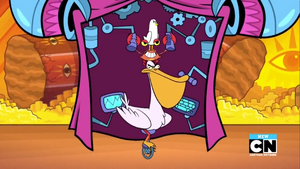 Lumino's true identity: The seagull, the crab, and the pelican, who operate him as a puppet from the inside.