Gel of Horror (in Japan)

Symbolic Dark Form
The Lump of Horror (known as the Gel of Horror in Japan) is a minor antagonist and boss in the video game Kingdom Hearts III. It is an Unversed created by Randall Boggs and Vanitas to eliminate Sora, Donald Duck, Goofy, Sulley, and Mike in the Monstropolis world.

The Lump of Horror is a giant black blob of goop with a large jagged mouth and sad-looking orange Unversed eyes, two long arms and three-fingered hands, and several of the scream canisters used by Monsters. Inc to contain children's screams and other machine parts sticking out of its body. It also has the ability to transform into a bird-like form with large wings.

The Lump of Horror was created by Vanitas as a trump card for Randall to get rid of Sora, Donald, Goofy, Sulley, and Mike, who were interfering with their plans to use the Unversed to collect screams from children at Monsters, Inc. When the heroes first encounter the Lump of Horror, it is in an inactive state and Randall tries to activate it to have it eliminate them for him, but fails because the lesser Unversed infesting the company have yet to collect enough negative energy to power it up. However, shortly after the heroes leave the dormant Unversed be, Vanitas arrives and uses the scream canisters at the factory to bring the Unversed to life as Randall watches in satisfaction, after which Randall and Vanitas bring it to the Door Vault of the company and have it wait for the heroes' arrival while still pretending to be dormant.

When the heroes arrive at the Door Vault and see the seemingly dormant Unversed, Mike scoffs at Randall for seemingly attempting the same futile trick again, but it then assumes its true form and Randall commands it to attack the heroes. After a long battle, the heroes manage to defeat the Unversed, causing the tar forming its body to dissolve and leave behind only the inert mechanical parts of the Unversed, much to Randall's dismay.

The Lump of Horror mainly attacks by sliding across the floor at the party at a high speed and spitting fireballs at them, both of which can be blocked. It can sink itself into the floor to generate several Tar Hands that fling fireballs at the party, and release steam from the scream canisters lodged in its body to give the thundercloud status ailment to any party member that makes contact with it. When its HP drops below a certain point, the Lump of Horror will transform into a bird-like form and summon several Tar Hands all around the walls of the battle arena, with itself using its wings to launch gusts of wind at the party from the center, which does not damage them but will push them away from the Unversed if not blocked, making it harder for them to deal damage to it. 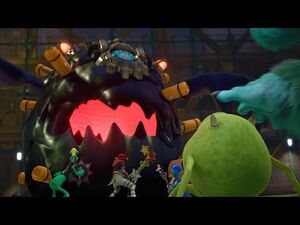 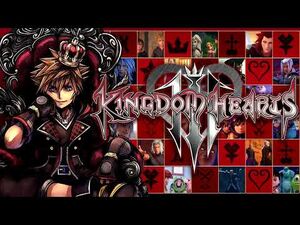