The Kingdom of Loathing

Increase its own power by assimilating slimes, absorb the power of the Sauceror shrine, kill the player character

Lumpy the Sinister Sauceblob is an optional boss in The Kingdom of Loathing and serves as the nemesis of the player character if he/she is a Sauceror.

After having acquired the 17-alarm Saucepan, Edam will tell the player that your Nemesis's lair is located: at a cave in the Big Mountains. After having completed the puzzles to unlock four doors, the player enter the Inner Sanctum and defeats Lumpy, who manages to escape through a crack in the wall.

Some time later, the player will be randomly attacked by a series of assassins hired by Lumpy. After the fourth (Heimandatz the Nacho Golem) is defeated, it'll drop a map depicting Lumpy's Secret Tropical Island Volcano Lair. There, the player discovers that Lumpy is holding a convention for slimes with the intent of absorbing them in order to become more powerful. Lumpy then notices the player and sends Security Slimes after him/her, who are then defeated. Lumpy itself then attacks, and after being defeated, escapes backstage, forcibly absorbing a small green slime along the way. The player follows its trail through a series of corridors and into the Volcanic Cave. Lumpy is then found at the center of a volcanic maze, in the midst of desecrating an ancient Sauceror shrine in order to consume its powers. Once defeated, Lumpy recoils and begins slipping off the island of volcanic rock. As it loses its grip, it calls out to the The Demonic Lord of Revenge before hitting and disappearing beneath the lava. Shortly thereafter, it rises again, now a flame-wreathed mixture of charred sauce and magma and infused with demonic energy. After being defeated for the final time, Lumpy desperately lunges forth onto the altar, which then explodes, causing the volcano to partially collapse upon itself, presumably killing Lumpy in the process.

Lumpy as it appears in the Nemesis Lair

Lumpy during the first battle in the Volcanic Cave 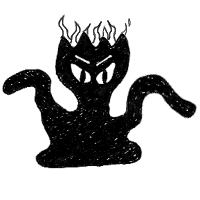 Lumpy's final demonic form
Add a photo to this gallery

Retrieved from "https://villains.fandom.com/wiki/Lumpy_(The_Kingdom_of_Loathing)?oldid=3040145"
Community content is available under CC-BY-SA unless otherwise noted.