Lunarians, also known as the Moon People (月人, tsukijin), are a species that inhabits the Moon. They are the main antagonists of Land of the Lustrous series. They invade the Land constantly and attack the Gems in order to collect their gemstone bodies, using their shards to forge weapons and decorations. They have also defeated and captured the Admirabilis to use them as cattle. Their leader is Prince Aechmea.

They are later revealed to be the reincarnations of the human spirits post-apocalypse. They escaped towards the moon after the end of world and unable to move towards the afterlife.

The Lunarians that come to the Land are various types of humanoid beings with a Buddhist motif. Most of the Lunarian troops appeared as pale, smooth genderless beings with blank eyes and flowing clothes adorned with bands and beads. In the anime series, they are portrayed with white skin and yellow or pink shades on their clothing and accessories. Some certain Lunarians showed different appearance from a large statue-like figure (like the new types of Lunarians that attacked the Amythest Twins and later took away Ghost Quartz) to beast-like appearance dependant on types (like Shiro and Prince Aechmea's beast form).

The Lunarian's true nature is later revealed to be the souls of humans who once inhabitanted on the Land before the doomsday. They captured the Gem People mainly for forcing Adamant-Sensei, who was a cyborg made by Lunarians, to pray for their souls and send them towards afterlife. Not only did they captured gems, they showed an interest to Adamant as well because of the latter's renounced duty.

Besides Gems, the Lunarians also captured Admirabilis and made them as their cattles, even disposible pawns to do their immoral biddings. The Gem People that got shattered were grinded into dust and spreaded across the surface of Moon, and the Lunarians' weapons were actually forged by artificial gems. It was also revealed that only the gems with hardness above 5 could be recovered, meaning that there was no space for any hope that Antarcticite could return back.

During the recovering progress, the Lunarians revealed to Phos that the Gems were about to regenerated, and the Red Diamond would be the first to complete. However, they would be incompleted, both in shape and memory, since there weren't enough natural shards for them. To make it short, some dusts were consumed by those Admirabilis on the Moon and became a part of their shell. Some Admirabilis were unable to seperate their body from their shell, which means If Phos wanted to recover all of the lost Gems, they had to kill every Admirabilis to get their shell.

Phos was hestitated to do so even if they had parts made from Aculeatus' shell, making them having authority over the entire species, and they immediately stopped ordering Admirabilis to remove their shell when Phos saw one of them shivered in pain and tears as it tried to seperate itself.

So far, the reason of Lunarians captrying Admirabilis remains unknown, and it's unknown if it's also related to their racial goals of reaching afterlife.

When they attack the Gems, the Lunarians appear far in the sky from a black portal-like apparition called a "sunspot". According to Euclase, sunspots appear approximately once every three days for any season except winter. They only appear during sunny days, never at night or on rainy days. The reason that sunspots rarely appeared during the winter was because the sky is often cloudy. However, in rare occations, there're Double Sunspots and even Triple Suspots that annonced the arrival of a Lunarian army.

Lunarians with single Sunspot is the most recurring type of Lunarians in the series, often they are old type of normal Lunarians, but new types are included in few occations. The currently named Lunarians, including their leader Prince Aechmea and his right-hand Semi, are Single-Sunspot Lunarians.

The normal Lunarians attack comes with one larger central figure and a few dozen sundries, usually with bows and arrows or other ranged weapons. This type of sunspots is fairly ordinary and easy to dispatch. Four holes can be seen in the central figure when it is cut horizontally.

The new type may look the same as the old one, but not always. Sometimes, the new types have different formation, but still have the bigger figure on the center of cloud. The main differences are: their arrival type and, if the giant Lunarian was sliced, it would revealed more than four holes and released all kinds of weapons made of Gems from their body, while the cloud remained intact. These weapons are usually made from captured gem’s shards.

The Double Sunspots are a rather rare kind of sign that announced some special types of new and incresingly powerful Lunarians coming, appearing only in rare events where two sunspots appear superimposed upon each other. So far, only Shiro and the Pieces are shown to be with Double Sunspot.

Both types of Double-Sunspot Lunarians that appear in the series so far seemed to be related to Adamant and manage to be far more problematic for the Gems than the usual Moon People attacks, even more problematic than some new types of Lunarians with Single Sunspots.

The Triple Sunspots are even rarer types of Lunarian sign. So far, it had only occurred twice in the story. The first Lunarian with Triple Sunspots was a humanoid woman clad in white, adorned with a flowery motif and had a horrid facial disfigurement. She fell from the triple sunspot in front of Zircon and Bort, where it stood up and waited without answering any questions. It was eventually sliced in two by Phos. The mysterious humanoid figure was eventually revealed to be a forgery mimicking the Lunarian scientist who created Adamant and only known as the Professor in-series.

A second occasion of Triple Sunspot appeared during Phosphophyllite's night raid of the School. When the two factions of Gems fought amongst themselves to a draw, a Triple Sunspot suddenly appeared as the sun radiated the Land, revealing a large party of Lunarians with Cairngorm leading them, marching towards Phos. The Moon People finished off the worn out Gems, with Cairngorm personally shattering Phos into pieces, and collected them before heading back to the Moon, leaving the weary Gem People on the Land watching them leaving.

On the Land, the Lunarians do not seem to communicate by talking, though they do behave in an organized fashion, attacking and moving in unison almost like a hivemind. Despite that, Ventricosus was shown to be able to communicate with them when they were negotiating.

The Gem Humans are not known to have tried to communicate with them in the past, since all they did was to fight the Lunarians and defend other Gems. After the encounter with Shiro, while getting more and more suspicious on Adamant-Sensei's relations with the Lunarians, Phos began to figure out whether the Lunarians could ever talk, so that they could discover the truth about Adamant.

During a battle, Phos tried once by capturing a Lunarian during an attack and asking it if it understood them. Much to the chagrin of Phos, the said Lunarian only made a few unclear sounds before it was destroyed by the reinforcement from the Amethyst twins (In the anime, Phos was saved by Cinnarbar instead).

When on the Moon, however, the Lunarians drop their emotionless facade and becomes more mischievous and talkative. They began to speak and move in a fashion like the Gems or Admirabilis, even making funny faces when they met Phos on the Moon. It is revealed by Prince Aechmea that the Lunarians preferred not to talk or breathe on the Land, because the thick air was reminiscent of unpleasant things from their past. They also changed appearance. On the Moon, the Lunarians are shown have visible pupils and irises, wear their hair down, and also have parts resembling small rabbit ears on the top of their heads.

Like the Gems, the Lunarians are immortal and ageless since they were made of spirits of humanity. They are able to recover after being dispersed. Their regenertation acted at a much faster rate on the Moon, being able to do so in mere seconds. The Lunarians seem to be even more resilient than the Gems as they could recover without any physical reassembling.

The Lunarians have been shown eating food and drinking, unlike the Gems who had no such needs. Even so, is not clear if the Lunarians do so for nourishment and energy, or if they eat and drink for mere enjoyments. 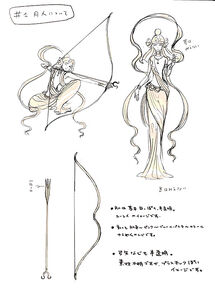 Lunarian's artwork from the anime series 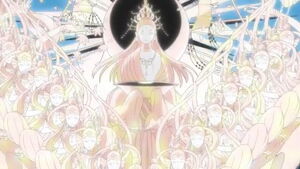 Lunarian army from the anime 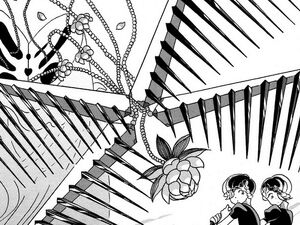 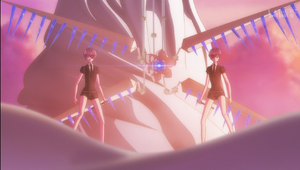 In the anime series, the New Type of Lunarian in the previous image is shown to have Sapphire's fragments (hardness: 9), explaing how it crushed Amethyst twins (hardness: 7). 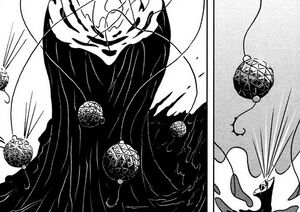 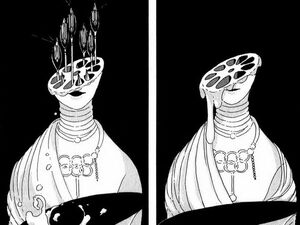 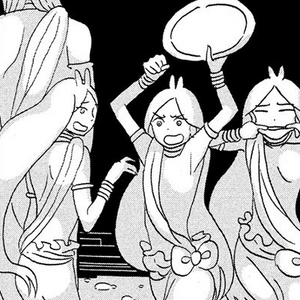 Lunarians on the Moon 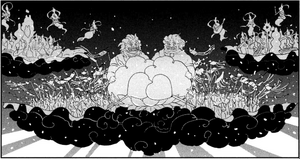 Retrieved from "https://villains.fandom.com/wiki/Lunarians?oldid=3890571"
Community content is available under CC-BY-SA unless otherwise noted.