To "cleanse the world" by killing criminals and wrongdoers

Lunatic is a vigilante from the anime series Tiger and Bunny. He believes bringing Justice to criminals equates to taking away their lives ruthlessly. Lunatic is often seen with a red moon in the background. His true identity is Yuri Petrov, Sternbild City's Administration of Justice's judge and also the TV heroes curator.

Yuri Petrov was the son of Sternbild's first superhero, Mr. Legend. However Mr. Legend's powers begins to decline and his father was pressured by the cityfolk's expectations on him. One day Mr.Legend directed his anger towards his wife Olga Petrov. An angered Yuri interfered with his parents' fight and stop his dad. Mr. Legend burned his face with his palm and Yuri awakened his powers and killed his father. He adopted his twisted views on Justice beginning that day.

Lunatic is very adept in using his blue flame manipulation, even greater than Fire Emblem, one of Sternbilds eight heroes. He can create arrows using his flames and shoot them through his crossbow and pass through solid obstacles. His flames being blue may indicate that his flames can reach incredibly high temperatures. 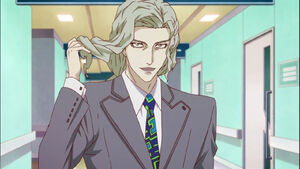 Add a photo to this gallery
Retrieved from "https://villains.fandom.com/wiki/Lunatic?oldid=3528825"
Community content is available under CC-BY-SA unless otherwise noted.