Lunatik is an obscure Marvel Comics alien supervillain. He, along with his partner Skreet the Chaos Mite, first appeared in Marvel Comics Presents #172.

He seems to be heavily based on DC Comics character Lobo (ironically, both characters were created by Keith Giffen)

Lunatik was a 600 million year old constantly mutating organism from the planet Wy'nkar, with little morals and a taste for mischief and violence.

Lunatik had consumed and exterminated all life on his own planet before escaping on a space ship sent there by the Interstellar Church of Perpetual Annoyance (a parody of the Universal Church of Truth).

He became a mercenary partnered with Skreet the Chaos Mite, an ancient and mischievous fairy who was the acting Space Pope. Lunatik turned Skreet over to the authorities after she demanded half the money for various jobs the two performed together, but Lunatik himself was also captured and was placed under arrest after a fight with the Avengers.

Years later, as Lunatik was being transported to the intergalactic prison Kyln for trial and imprisonment, the ship suffered a breakdown and crashed on Earth somewhere in the Alaskan wilderness.

The crash appears to have caused a heavy amount of injury, as Lunatik mutated into a newer form with different hair and eyes, and was smaller and much weaker. Lunatik formed an alliance with other survivors of the crash, Paibok the skrull and the Blood Brothers. The quartet rounded up people from the local town to help salvage the crashed ship, but Lunatik takes a bit too much pleasure in killing any of them that get out of line.

When another surviving prisoner, Drax the Destroyer, tried to stop the alien criminals, Lunatik helped Paibok in subdoing and Killing Drax.

However, Drax is later ressurected with a smaller and weaker, but more cunning, agile and combat skilled form. Drax got his Revenge on Lunatik by decapitating him and knowing about his regenerative abilities, crushing his head after telling Lunatik to greet Mephisto for him once he arrives in Hell. 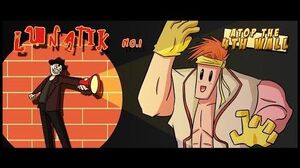 Lunatik -1 - Atop the Fourth Wall
Add a photo to this gallery
Retrieved from "https://villains.fandom.com/wiki/Lunatik?oldid=3703738"
Community content is available under CC-BY-SA unless otherwise noted.