The Lunch Club pantheon of deities

Murderous Deities
The Lunch Club pantheon are a group of gods who originated from the youtube channels of the youtube group named Lunch Club. While their goals are unknown they are not opposed to killing innocents to get what they want.

Necropig is an extremely mysterious entity, he seems to be trapped in some type of dream dimension terrorizing the locals, waiting for his awakening on earth. He is a giant black centaur like creature with blood shot eyes, and a gun always in his hand that he never uses, he can also fly. 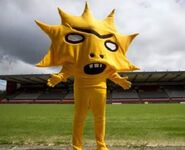 Necropig
Add a photo to this gallery
Retrieved from "https://villains.fandom.com/wiki/Lunch_Club_Pantheon?oldid=3693660"
Community content is available under CC-BY-SA unless otherwise noted.