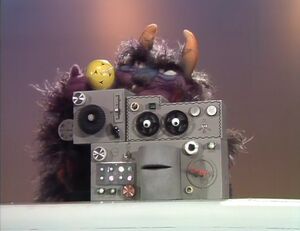 Luncheon Counter Monster is a hungry purple monster who first appeared on "The Muppet Show". His name derives from his debut sketch in the Nancy Walker episode, where he sat next to Nancy at a luncheon counter and ate the flatware. Subsequently used mainly in bit parts or in the chorus, the monster's hunger would remain his dominant characteristic, as displayed in one of his more prominent appearances, the remake of the "Coffee Break Machine" sketch. The character would outlast many of his fellow background monsters, appearing in a variety of productions into the 21st century.

In Michael Eisner's introduction in The Muppets at Walt Disney World, Tug and he show up and maul him when Gonzo stated that he will take care of that.