Fulfil the wishes of Father.

Lust is a major villain of the Fullmetal Alchemist manga and its two anime adaptations. She is the first of the Seven Homunculi to be introduced and she plays an important antagonistic role for the first part of the series, until her premature demise by the hand of Colonel Roy Mustang, one of the major protagonists.

Lust appears as a very beautiful woman, tall, slender and well-endowed, with long dark hair and dark eyes. She wears a black dress, long gloves and high heels, and sports the red lines characteristic of the homunculi on her arms, with her distinctive Ouroboros mark below her collarbone. She is one of the few homunculi without a secondary, "true form" and also one of the few who is seen wearing normal clothes in addition to the distinct black ones that are part of her appearance as an homunculus.

Like any other homunculi, Lust has strength, speed, reflexes, stamina and durability way beyond human level. Also, she cannot age and has near-limitless regenerative abilities provided by the Philosopher's Stone that serves as her core. As long as there is power left in her Stone, she can recreate her body from nothing, even when reduced to dust in a burst of flames.

Lust's special power, the "Ultimate Spear" enables her to turn her fingertips into long and sharp blades that can cut through virtually anything, which she can extend seemingly without any limit. She most often transforms all the fingers of one hand and uses them either like claws or in fencing style, but she can also elongate her fingers one after another to target several foes at the same time.

With this power, she is able to destroy stone and steel with no effort and she demonstrates expert mastery of her blades, as she strikes with uncanny precision and always aims for vital spots. Moreover, she is very swift and nimble, being able to best fighters renowned for their speed, and she prefers strategy over brute strength, as she always seeks to disarm or disable her victims before striking to kill, making her one of the three deadliest homunculi.

Lust also proves to be one of the smartest and most level-headed among the homunculi. She is very skilled in devising plans of actions and knows how to deal with situations in the most convenient ways. She also knows full well how to use her beauty to entice men and bring them into Father's grasp or to promise greedy people power and wealth to use them. In addition to these skills, she is a talented infiltrator, able to blend into a crowd with remarkable stealth, which proves useful to collect information.

Lust is the second born of the Seven Homunculi and is around 300 years old.

Like almost all her fellow homunculi she is very proud of her nature and disdainful towards mankind, (which she regards as frail, predictable and hopelessly dumb) but to a greater extent than many of them, although she prefers voicing her opinion coldly rather than mocking people. She denies any accusation of being a monster, preferring the term "evolved human". True to her name, Lust is very beautiful and likes to act in a flirtatious way. She is not lascivious though and instead prefers to seduce people and use her beauty for her own gain. Also, she lusts for violence and chaos, as evidenced by her obvious enjoyment in battle. She is very polite and collected, but at the same time cruel, sarcastic and threatening.

Lust is Father's main field-agent, intelligence gatherer and overall supervisor. She is one of the homunculi's two third-in-commands, tasked to supervise the "subterraneans" aspects of Father's goals while Wrath deals with the political and warmongering aspects. Lust gets along well with the other homunculi as seen when she asks for Envy's opinion. She has an especially close older sister-like bond with her partner Gluttony.

Prior to the start of the series, Lust supervised the secret alchemic experiments performed in the Third and Fifth Laboratories about human transmutations, transformation of people into animal chimeras and mostly the creation of the Philosopher's Stone. (Which in the series is created from human souls.) She had the souls of several convicts extracted from their bodies and transplanted into armours, so that they could guard the Fifth Laboratory after she had it closed. Among these convicts-turned-guards were Barry the Chopper.

Lust first appears after the primary protagonists, the brothers Edward and Alphonse Elric, expose Father Cornello, a "miracle maker" and high priest of the false cult of Leto, as a fraud. Cornello promised wealth and resurrection for their loved ones to his believers, planning to make them into an army that does not fear death and use them to take over the nation of Amestris where the series takes place... or so he thought. Lust has previously provided Cornello with a half-complete Philosopher's Stone which he would use to make "miracles", but she had no intention of making him leader of the country. She just wanted his "army" to be slaughtered by the Amestrian military, as the homunculi need huge bloodsheds at several points of the border, following the nation-wide transmutation circle that they are digging. All this with the ultimate purpose to sacrifice the entire population of Amestris to enable Father to absorb the Truth (the source of all the alchemic power of the universe) and become the new God of the Fullmetal Alchemist world.

Lust mercilessly kills the now useless Cornello and calls forth Envy to impersonate him, in order to increase the anger of the townfolks, who are furious for having been lied to, and cause violent riots. Through this and with help from soldiers sent by Wrath, Lust manages to cause a huge bloodshed as planned. She then starts to keep an eye on the Elric brothers, whom the homunculi need as "candidates for the sacrifice" to enact Father's goal. As she discreetly tails them, she witnesses first-hand their encounter with Tim Marcoh, the alchemist who worked on the experiments on the Philosopher's Stone and fled out of guilt. She then goes to Marcoh's house and tells her that he his under watch and that if he tries to flee again, she would burn the town he is hiding in to the ground. As Marcoh has told Edward Elric where to find his notes about how to create the Philosopher's Stone, (in the military section of the national library in Central City, the capital of Amestris) she precedes him there and sets the building on fire to destroy Marcoh's report, as searching through the thousands of book on her own would have proven nearly impossible.

Lust and Gluttony then return to Central City. She appears alongside Envy when Edward Elric has just sneaked into the Fifth Laboratory and defeated one of the armour-bound guards. She and Envy kills the guard, who was about to tell Edward everything he knew, and take him out to safety, before blowing up the building to erase all evidences. However, Lieutenant Colonel Maes Hugues, a friend of the Elrics, understands the homunculi's goal, following what the Elrics have discovered. Lust appears and wounds him but he manages to flee, only to get killed later by Envy.

This murder causes Hughes' best friend, Colonel Roy Mustang the Flame Alchemist, to seek revenge and start his own investigations. As Mustang is a valuable candidate for the homunculi's sacrifice, they cannot dispose of him, so Envy frames an innocent soldier for the murder to keep him quiet. Meanwhile, Lust begins to date Jean Havoc, one of Mustang's trusted subordinates, to get information from him but not to avails as he keeps his work and his private life separate.

However, Envy discovers that Barry the Chopper is still alive and is hiding from them. Resolving to kill this troublesome witness, Lust releases his former human body (in which an animal soul was transplanted) to track him down, and orders Envy and Gluttony to take the matter in hand. However, they get locked in battle with the Xinese prince Ling Yao and his bodyguard Lan Fan, who are more than a match for them, allowing Roy Mustang, his right-hand-woman Riza Hawkeye, Jean Havoc and Alphonse Elric to follow Barry's armour and human body to the Third Laboratory.

Mustang eventually reappears, having drawn transmutation circles on his hands with his blood and burnt his wound to stop the bleeding. He then relentlessly scorches Lust with his most powerful fire blasts until she exhausts all her regenerative power and she vanishes into ashes a nano-second before she could pierce Mustang's forehead.

The 2003 anime﻿ series radically diverges from the original manga plot. In this storyline, Lust was created by Scar's brother in a desperate attempt to resurrect the woman he loved. She sides with the homunculi and plays a role similar to her role in the manga, being seen encouraging humans to create the Philosopher's Stone and disposing of the witnesses and unneeded ones.

However, she eventually recovers memories of the human from which she was created and begins to crave for becoming human. This desire leads her to betray her fellow homunculi when she realises that Dante, the storyline's main antagonist, uses them for her dirty work and has no intention of making them human as she promised. Lust eventually gets destroyed by the storyline's counterparts of Wrath and Sloth. Wrath slashes her while in possession of a locket containing hair from her human form. Lust dies, embracing the mortality that defines the human race. 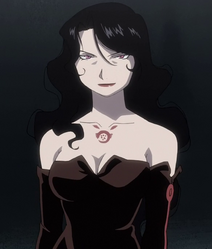 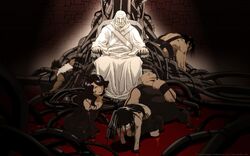 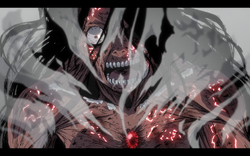 Lust's death.
Add a photo to this gallery 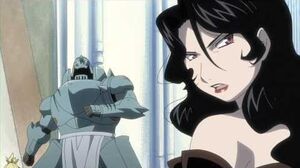 Retrieved from "https://villains.fandom.com/wiki/Lust?oldid=1823337"
Community content is available under CC-BY-SA unless otherwise noted.