Villains Wiki
Register
Don't have an account?
Sign In
Advertisement
in: Mature, The Warriors Villains, Crime Lord,
and 31 more

Warlord of the Rogues

Kill the Warlord of the Gramercy Riffs, Cyrus, and frame the Warriors his murder (temporarily succeeded).

Luther is the leader of the The Rogues and the main antagonist of the 1979 cult classic film The Warriors.

He was portrayed by David Patrick Kelly, who also portrayed Sully in the 1985 action film Commando, T-Bird in the 1994 film The Crow, and Unger in the 2005 film The Longest Yard.

Cyrus (leader of the biggest gang in NYC, the Gramercy Riffs, who every gang member admires) invites The Rogues to his meeting in the Bronx where a lot of the other gang members were invited, except for the Orphans. Cyrus had a plan in which every gang in the city can work together to beat the cops and take NYC. All gangs like his idea and go with it. But everything goes wrong when Luther smuggled a gun to the meeting and shot and killed Cyrus, which turned to a massive riot. Fox (a member of the Warriors) saw him do this, Luther pointed his gun at him and was going to fire but a bright spotlight shined into his face and the cops arrived allowing Fox to escape. Cleon (the former leader of The Warriors) decided to inspect the body of Cyrus only for Luther to see him and frame him for the murder, calling out "The Warriors did it!" and convincing everyone around him Cleon and the Warriors were responsible for Cyrus' death. Luther and a following gang member charged at him but Cleon to suppresses them. The Riffs believed Luther's lie, they outnumbered Cleon and beat him to death. The Riffs called a hit on The Warriors now every gang in NYC is after the Warriors.

Luther and the rest of the Rogues then headed to a candy store, where Luther called an unseen figure to report that Cyrus had been killed. After he got off his call, Luther was approached by his second-in-command Cropsey, who stated his concerns about the Riffs finding out they were the ones to kill Cyrus. Luther assured Cropsey that they weren't in any danger and that the Riffs were looking for the Warriors, as well as that if they got to the Warriors first they wouldn't have anything to worry about. Luther then threw Cropsey away and said they were heading out. The girl working as a clerk at the candy store then asked them if they were going to pay, causing Luther to shout "FOR WHAT?" at her and throw something at her before walking off with the rest of his gang.

At the end of the movie, the Rogues followed the Warriors to there hideout at Coney Island. Luther rattled a bunch of bottles together to get the Warriors to come out and confronted them at the beach. At the beach, Luther was going to kill all the Warriors with his gun, but Swan (the new leader of the Warriors) threw a switch blade at his hand and stabbed him in his wrist, which caused him to fall to the ground. Then the Riffs came into the scene to kill the Rogues because a snitch told them they did it. The scene ends with the Riffs going to kill Luther and the rest of the Rogues. The hit was called off after The Riffs found the true perpetrators.

The game takes place three months before the events of the story occurs, Luther first appears in the end of Mission 4: "Blackout". While the three Warriors (Vermin, Snow and Ash) manage to escape Riverside by running away from the Furries, The Warriors seem to see two members of the Rogues being beaten to death by the Furries. It seem that Luther was with the 2 Rogues who were getting beaten up due to the fact he has mentioned abandoning 2 members of his gang to his second in commander, Cropsy.

Nothing was heard from then until Mission 11: "Boys in Blue". where in fact Luther and the Rogues sparked the Pelham, by killing a Police officer in which eventually the Police found out and lockdown Pelham. Luther is seen again in the beginning of Mission 13: "All-City", where a Riffs member invites them to the meeting that Cyrus is doing. Then on out this is where the movie event comes into play.

The showdown with Luther is slightly more climactic in the game then in the movie. In it the Rouges take cover up on a sand dune, with the Warriors and Rouges throwing stuff at each other. Luther would occasionally emerge to shoot at the player. When the player is close enough, they have to throw the knife at Luther, hitting him in the wrist, causing him to roll down the sand dune.

Luther is seen as a cruel and mentally unstable man who enjoys causing and seeing chaos. Since he is the only man to cause the riot in Pelham but to also manipulate the Riffs into believing that The Warriors were the ones that killed Cyrus (In results in doing so made the Riffs mistakenly kill the Warlord of the Warriors, Cleon.). He also seems to be a coward as well as a backstabber due to the fact he left his fellow gang members behind to die while he escape. 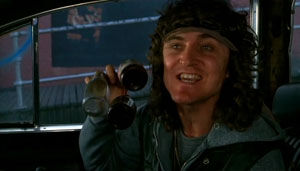 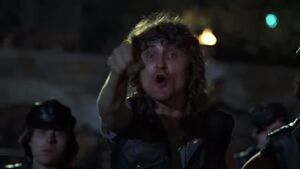 "The Warriors did it!" 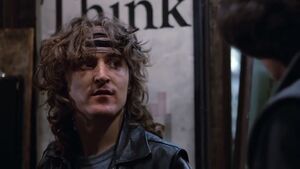 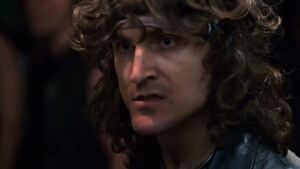 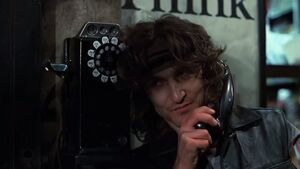 Luther talks on the phone with an unseen "mentor". 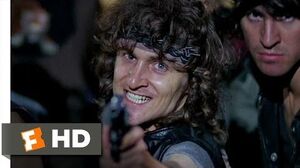 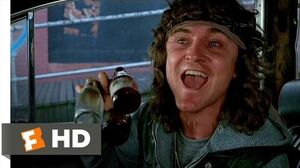 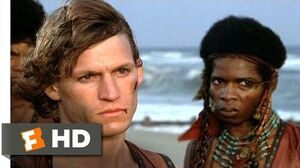