Luther Black is the main antagonist of the Demonflame Adventure Pack in Champions Online- he is also the leader of the demon-worshiping cult DEMON.

Luther Black was a warlock who dedicated his life to foul sorcery and sacrificed his own humanity via mutilations many times in an attempt to gain the powers of a god, always failing in his quest.

Eventually, however, Luther Black's plans climaxed in the story of Demonflame, where he managed to use the Avatars of the Kings of Edom to begin a transformation into a lesser Edomite himself.

Such an ascension would make Luther Black all-but-omnipotent and, as a result, the heroes of Earth, alongside Witchcraft and a reluctant Demon Key, are sent to battle Luther Black and his many minions.

Due to the intense battles that occur, the heroes and the Demon Key arrive almost too late, with Luther Black having enough power to transform into a Edomite form.

Thankfully for all, his form was still weakened and the Demon Key destroyed the items containing Luther's magic- while the heroes kept the would-be-god occupied.

Ultimately, Luther's ascension was stopped before he could reach his goal of godhood and the world was saved from his madness. 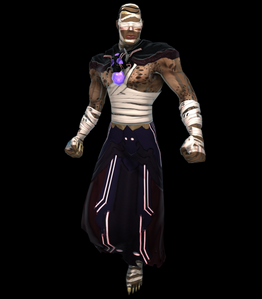 Luther Black's human form
Add a photo to this gallery
Retrieved from "https://villains.fandom.com/wiki/Luther_Black?oldid=3393744"
Community content is available under CC-BY-SA unless otherwise noted.