Keeping dead women impaled on display in his "girly museum".
Talking to Torque and stalking him.

Torture and murder as many women as he could before dying (succeeded).

Continue his crimes even in death (dependent upon player's choice).

Luther Stickwell, also known as The Creeper, is one of malevolent spirits haunting the city of Baltimore in the 2005 action horror game The Suffering: Ties That Bind.

He was voiced by S. Scott Bullock.

Nothing is known about Luther's childhood, however his misdeeds as an adult are quite infamous throughout Baltimore. He used to work as a pimp and was known for his deep hatred of women. In Consuela's "The legend of The Creeper" it is stated that according to the rumors, he has killed from fifty to over two hundred, not disdaining women in his employ, while Ranse Truman mentions 71 victims during his monologue. However, The Creeper himself will share even more details while battling Torque.

His victims were usually the prostitues who thought they were only temporal sex workers and could bail out after gaining enough money to move forward in life. Luther, on the other hand, had other plans in store for them. The moment he heard them complaining about being tired or wanting out, he would "brutalize" them a bit, beating and raping and using some kind of a spiked contraption to torture them, turning them into mind-broken, docile sex slaves. He even mentioned watching his clients doing all kinds of atrocities to the girls and that some of them liked the horrible states of his unfortunate victims. After they died from all the abuse inflicted upon them, Luther would place their dead bodies on the spikes in his personal hideout as trophies or pieces of art. Some time later, his killing spree would come to an end when he accidentally fell in his own spiked contraption, making him bleed out slowly. His body was never found and the police of Baltimore couldn't officially conclude Luther Stickwell as a culprit behind the murders, since the warehouse he died in has burned down before anyone could discover him. Though instead of truly passing away, Luther emerged from hell as a bloodthirsty demon and continued to lurk the alleyways of Baltimore in search for more women to murder.

Given Torque's (more precisely, Blackmore's) unique influence over malefactors and his proclivity to summon them to certain areas, it is very likely that Luther was dragged along with the other creatures. We first meet him at the prison where Torque was held before the events of the first game as an apparition in a scene with a sobbing woman that loses her head and dies right as Torque approaches with Luther's figure appearing nearby. They both disappear into thin air as if it was just a warning that Luther will play a significant role in Torque's life in the future.

5 years later, upon Torque's arrival to Baltimore, Luther fully manifests himself on the streets of the city and roams freely, taking advantage of the chaos caused by the massive outbreak of malefactors. He is particularly interested in the spirit of Torque's deceased wife Carmen, at one point dragging her into the sewers and sexually assaulting her. He later appears behind the metal grates and taunts Torque, pointing at what happened earlier.

From now on, Torque will witness Luther actually killing and hurting real people around him, mostly women. Such instances are when he scares off Jordan, making her retreat by climbing a ladder to the roof of a nearby building and gives Torque an "advice" about not trusting females while choking one of his prostitutes to better illustrate his words and when he murders an armed black woman from behind a metal barred door, then tries to convince Torque to be quicker if he "wants the choice bits for himself" and warns him not to communicate to Jordan anymore, calling her a "f*cking cunt". He will even attempt to rape Consuela if Torque chooses not to leave her trapped inside a Foundation facility, which can be prevented by attacking Luther. It puzzles and angers him, then he disappear, but not for too long. In the Eastern Baltimore Correctional, Torque will receive a call and if he answers it, The Creeper will mimic female voice to trick Torque into thinking that it is a prostitute, only to reveal his real identity and further express his hatred to women, stating that they are the true parasites.

The following incidents of the Creeper's manifestation will be present only if Torque bends to the dark side, killing most (if not all) survivors, thus receiving bad karma. While Jordan talks to Torque from behind the reinforced glass in the Eastern Correctional, Luther suddenly appears and hits her, calling her a "gilded cunt". She then runs away and Luther explains that he's got her under control and leaves her for Torque to slaughter. He will then assault Torque in the sewers under the Correctional, where he first kills one of the male inmates by cutting off his arm and making him bleed to death, then pushes Torque away from the ladder to the surface. While he is climbing the ladder, Luther expresses his dislike towards the "weak" men, most likely implying homosexuals. He once again appears behind the barred door in the Correctional's solitary confinement and makes a joke about Torque and Miles being more than friends.

Torque's final encounter with the Creeper occurs right after he defeats the Horde in Eastern Industrial. Luther appears floating above the hole in the floor made by previously killed Horde and encourages Torque to jump down. Torque follows Luther's demand and lands in Blackmore's Drowning Pool. There he is judged by Dr. Killjoy, Copperfield and The Creeper himself, all of them giving their own opinions on Torque's choices throughout the game. Once Torque is done exterminating waves of malefactors, Luther suddenly turns on him, saying that he is not going to let some "pint-sized serial killer" steal his glory and starts the battle. During the fight Luther tells Torque his story while still attacking him with his bladed appendages and teleporting from time to time. Since he cannot be killed by conventional means, Torque has to use his beast form to damage him when Luther opens his coat and eventually defeats him. The Creeper falls to his knees, his coat opens for the last time and his own "girls" start stabbing him on the ground, while he moans in pleasure. After that battle, he is never seen in the game again.

Luther is a tall (about 2 meters) and obese balding white male with the only hair that is left being greyish in color (it is unknown whether he was elderly at the time of his death or this is just a side effect of his "rebirth" as a dark spirit). He wears a greenish tattered bloody trench coat, black leather gloves, brown boots and grey baggy pants with a belt. His face appears to have been mutilated in some way, with scars and cavities to the both sides of his mouth, presumably resembling a smile. Apart from being disfigured, Luther's face is covered heavily with make up: drawn eyebrows, blue ink around his almost black eyes with green irises, red blush, dirty-white powder and red lipstick. All this gives the impression of an exaggerated prostitute make up or even a clown make up (again, it is unknown whether it is just a part of his warped spirit or he actually used to put women make up on as a hobby or as a way to hide his identity).

As if his face wasn't horrifying enough, the inside of Luther's coat is rather more perplexing and gruesome. His torso is a torn bloody mess that houses two meaty tentacles ending with razor sharp blades and, of course, his main signature feature - three armless prostitute bodies attached to Luther's torso at the legs, all dressed in black lingerie with one being bald, another wearing pigtails and the last wearing messy brown hair, not to mention that each one has the same blade sticking out of the mouth. Their names are Alicia, Alana and April, which becomes known during the boss battle with him. Luther can walk like a normal human, but frequently uses his bladed "girlfriends" as a mean to move around faster.

Some other notable features of his include a golden pendant that he wears around his neck and the fact that his coat is literally merged with his body, since a thick layer of flesh can be seen on the inside.

Without a doubt, Luther Stickwell is an incredibly disturbed, vile, sadistic and disgusting individual who takes great pleasure in causing death and pain. He sees women as pests, objects without any rights or uses other then sexual gratification. His hatred and desire to destroy were so great that his tainted soul refused to abandon this world and manifested itself in it as a monstrosity, ugly both in appearance and on the inside. He is prone to laughing almost maniacally while sharing his atrocities with Torque, however his demeanor may change from relatively "friendly" to utterly furious in seconds, especially when Torque keeps involving himself with Jordan and other women. He isn't openly hostile towards Torque throughout the game as he perceives him as a fellow murderer and even encourages him to kill women on several occasions, ignoring Torque's true intentions. Luther's mind combines both childish and mature mentalities. He likes to play around with Torque, making jokes about his murders and follows him everywhere seemingly without any reason, but it becomes clear that he carefully observes Torque on his journey through Baltimore and enjoys seeing him murdering countless malefactors and people, should he choose to succumb to Blackmore's manipulation. Luther is quite conservative in his beliefs about men, convinced that they have to be "forceful and brutal" and that the weak men don't deserve to live, only to be raped and killed. Taking this into account, he is very like a homophobe. It is further proven when he makes a joke about Torque and Miles being a gay couple and expresses desire to rape Elroy Junior during Torque's judgement, saying that "He looks like the type..." He is quick to hate the ones he once respected, trying to kill Torque in the Drowning Pool not wanting lose his "glory" as Baltimore's most feared serial killer, revealing himself as an egotistical megalomaniac. Although Luther may appear impenetrable and confident, it is hinted that deep inside he is insecure and has femenine and homosexual tendencies himself. His face paint and proclivity to constantly joke about these topics may indicate that fact. He is also an extreme masochist. During the battle he mentions that while dying in his own contraption he watched in "sheer ecstasy" as he was bleeding and moans in pleasure, asking his appendages to stab him "deeper, faster and harder" after being defeated by Torque, yet another example of him being insecure about his nature.

Overall, Luther Stickwell might be the most evil character in Ties That Bind, if not in the whole series. While Copperfield never realized the horror of his actions and was pretty honorable, Dr. Killjoy used his cruel methods in achieving noble means and even Blackmore had some moral compasses and standards, Luther was fully aware of how atrocious his actions were, which only urged him to commit more crimes. 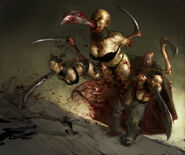 Luther Stickwell aka "The Creeper".

Luther killing a woman and talking to Torque.

Luther's second apparition in the sewers.

Consuela's writings on The Creeper.

Luther floating over the Drowning Pool.

Luther in the cage near the Drowning Pool right before the battle.

Add a photo to this gallery
Retrieved from "https://villains.fandom.com/wiki/Luther_Stickwell?oldid=3609858"
Community content is available under CC-BY-SA unless otherwise noted.