Getting her nails done.

Luv is the central antagonist of the 2017 neo-noir science fiction film Blade Runner 2049, the second installment of the Blade Runner franchise after the original cult classic movie Blade Runner.

She was the personal assistant and bodyguard of the CEO of Wallace Corporation, Niander Wallace. She and her boss were on a quest to find the only replicant biologically born – the child of former Blade Runner, Rick Deckard, and deceased replicant and former assistant of Eldon Tyrell, CEO of the extinct Tyrell Corporation, Rachael.

She was portrayed by Sylvia Hoeks, who also played Camilla Salander in The Girl in the Spider's Web.

When the Blade Runner agent K (who is also a replicant) finds the remains of a pregnant replicant in a farm that belonged to a Nexus-8 replicant called Sapper Morton, he visits the headquarters of Wallace Corp. in L.A looking for information about the identity of the replicant. There, K finds out the remains are from the secretary of the deceased founder of Tyrell Corporation (the company responsible for the creation of the replicants), Rachael. Luv gives him the recording of Rachael's Voight-Kampff test performed by former Blade Runner Rick Deckard, and K notices Rachael loved Rick.

Luv informs his boss, Niander Wallace, about K's investigation, then Luv and Wallace examine a newborn replicant. Here, it is revealed that Luv helps Wallace see (as he is blind) by activating a device on his neck that is connected to two floating cameras that serve as Wallace's eyes, then he explains that the demand of replicants have grown as new worlds are being colonized, Replicants are used in those colonizations, and if replicants can biologically reproduce, this could fasten the production. After finishing examining the replicant, Wallace kills it. As a tear runs down Luv's cheek, Wallace orders Luv to get the remains and find Rachael's child. Before leaving, Wallace calls Luv his "best angel".

Luv does as commanded and steals the remains from the LAPD. Meanwhile, K's investigation to find the child leads him to an orphanage in San Diego. He is attacked by the outcasts, but Luv rescues him by killing the attackers with a drone. K finds the orphanage, but there are no registers of Rachael's child, but he finds a wooden horse from a memory which makes him believe that he is the child and his memories are real.

K seeks Dr. Ana Stelline, the person who creates memories for the replicants, and she confirms K his are real. K, shocked and confused, returns to L.A, but fails his Replicant Obedience Test and must be "retired". However, his superior Lt. Joshi lets him escape. K then escapes with his holographic girlfriend (an artificial intelligence product of the Wallace Corporation) named Joi by putting her in a mobile emitter and gets the wooden horse examined. This leads him to Las Vegas where he finds Rick Deckard.

Luv looks for K in his apartment, but when she doesn't find him, she looks in the LAPD where she interrogates Joshi and tortures her by making her grab broken glass very hard. However, Joshi refuses to talk, so Luv kills her by slitting and stabbing her in the stomach, then uses her computer to track down K.

Luv and Wallace's men attack Deckard hideout, so K and Deckard fight them, but get outnumbered, leading to Deckard getting kidnapped by them. K tries to rescue him, but Luv beats him up, leaving him in the ground. Joi begs Luv to stop, but Luv destroys the emitter in front of K, then leaves K to die. However, he gets rescued by the Replicant Freedom Movement, who reveal to him that Rachael's child is actually female. They also order K to kill Deckard before he tells Wallace who the child is.

Luv takes Deckard to Wallace who offers him a clone of Rachael in exchange for the information, Deckard refuses, so Wallace orders Luv to kill the clone and take Deckard to the OffWorld Colonies to be tortured. K intercepts the convoy near the wall that separates L.A from the growing sea and takes down the flying car where Luv and a handcuffed Deckard are. After killing the driver, K gets in a shootout with Luv that results in both getting wounded. Luv fights K outside the car as the tides drag it, slowly filling it with water. After fighting K for a while, Luv mortally stabs him in the side. She leaves him and returns to the car to get Deckard out of it. Now with the water up to their necks, K makes a last attempt to defeat Luv. He tries to choke her as Luv tries to drown him, but K fights back and holds Luv underwater until she drowns, leaving her replicant lifeless body to be dragged to the depths of the sea.

K fakes Deckard's death and takes him to Stelline after deducing she's his and Rachael's daughter, K waits outside until he realizes he won't make it and peacefully succumbs to his wound as Deckard meets with Stelline.

Extremely hot-tempered and violent, Luv was a complete and utter killing machine. She shows no remorse whatsoever after committing murder and does anything in order to serve her master Niander Wallace.  In the end, when she gets a chance of redeeming herself, she instead chooses not to, and instead wants to fight Joe (KD6-3.7)(K) in order to prove to both K, and herself, that she's "the best one."  This ends up backfiring on her, however, for when she believes that K has died, she turns her back to him to retrieve Deckard, firmly believing that she will complete her mission, and is visibly shocked when K surprise attacks her from behind.  This shock would turn to outrage as she desperately tries to finish him off, only to end up drowning in the more competent replicant's grasp, allowing K to successfully save Deckard. 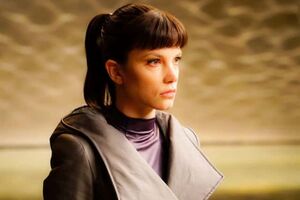 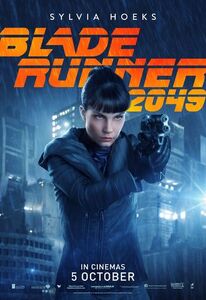 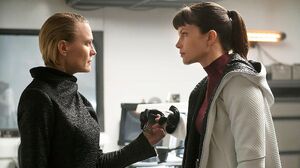 Luv interrogating Joshi before killing her. 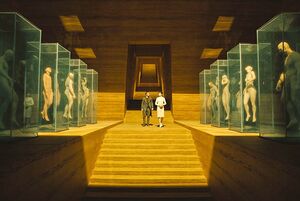 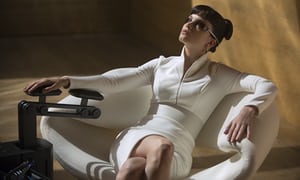 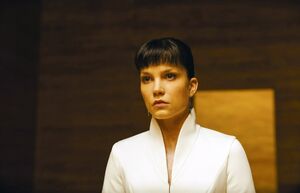