Villains Wiki
Register
Don't have an account?
Sign In
Advertisement
in: Articles under construction, Categories Needed, Rewrite,
and 15 more

Help Dóminus in his plans (failed)

Hhelp and be a friend of Franky (after being redeemed; succeeded)

Prototype 708 also known as Luz is one of the mayor antagonists (alongside Segundo Mehija and Dóminus) in Yo Soy Franky, serving the secondary-antagonist-turned-mayor protagonist in Season 3.

Luz appears once she lands in 2016. She sees Franky and Christian together and disappears. Next day she camouflages herself into an 2016 android with a dress. She traps herself and sends Franky a message so she might come rescue her. Franky takes her home and asks her mum if the android can stay. Her mum agrees. Franky and Clara name her "Luz". From then she is known as Luz Andrade. She informs Dóminus about her success.

Once Chris is on TV, telling that he had an android girlfriend that forgot about all she survived, Luz tells that she is the girlfriend of Chris and they go on TV. Luz goes to the bathroom and contacts Dóminus. She tells him that she becoming Christian's girlfriend can make her breakup Franky and Chris. She encounters Chris and kisses him on TV and Chris tells she isn't his girlfriend. Sofia angrily takes them home, she asks Luz that she didn’t lose her memories, if she might she wouldn’t remember the laboratory she was created in.

Sofia knows that Luz is hiding something and she decides to repair Luz, meanwhile Sofia is logging in, Luz hypnotizes her and contacts Dóminus. He informs her that Franky and Chris will marry on the moon and that half of the guests are androids and the rest are humans that live with androids in peace. Luz asks him if she should eliminate Sofia, Dóminus falls in anger, he tells Luz that Sofia created him and if she gets eliminated he might never exist and Luz would never go back in time. Luz opens her system and undoes the hypnotic event, she tells that Sofia fixed her, Sofia does not remember and gets confused.

Breaking Up Franky and Christian

Luz contacts Dóminus, and Dóminus tells her that the day she is in, is the day when Franky and Chris become a couple again. He orders her to be very close to Franky. But Delphina invites Franky to tell her something and Luz contacts Dóminus and asks what to do. Dóminus sends her an application, and orders her to transfer it to Franky's system. Luz does it of course, and her work is done.

She informs Dóminus about her success, but Dóminus tells her that it's not over yet, that she must make sure that Trece and Tamara never become a couple. From then Luz pretends that she is in love with Trece.

Luz makes sure Tamara and Trece are far away from there self, and contacts Dóminus. Then they almost disappear cause EG was almost closed. Then Dóminus informs Luz that Franky and Chris reunited, and he tells Luz to be very careful.

The next day, Franky gets a list that has a map and tells that Franky's memories are there. Franky and Luz go searching for the chip. Then they get kidnapped by Doctor Carl, a scientist from Sunrise. He wants to copy the systems of Franky and Luz, so he might be able to create androids like them and he might get back his work in Sunrise. But Luz gives him a hand, and he falls on the ground. Luz and Franky escape home.

Once they return home, Luz becomes a true member of the Andrade family for saving Franky. She reads Sofia's mind, and tells what she thinks. Franky asks how does she know, and Luz tells that she was created in a different laboratory, and she’s an spy android. Next day, Luz comes to school. Franky tells the entire class about Luz' identity. Tamara gets scared of Luz. She asks the principal so Luz might go out of school. But on one break, Luz orders Tamara so she might not try to fire her out of school, cause they have the same goal, so Franky and Chris will never become a couple. Tamara agrees.

In school, in the bathroom, Luz calls Dóminus, so he might give her the info of Christian.

With Franky not being with him, Chris tries to find a new girlfriend by an app. The woman he texts with appears to be Luz. Luz asks him on a date, Chris agrees. They spend some time together, and Chris has great fun.

Sofia removes the rule that Luz placed in Franky’s system. In school, Franky asks Chris to be a couple. Chris agrees. Luz realizes that her plan failed.

Meanwhile all of this is happening, Paul goes on a mission to get Franky's hard-drive, and he gets a fake one. It turns out to be a fake hard-drive, and Sofia attempts to remove it, but she can't, cause Luz changed the password. Luz contacts her master, and tells him about her success. But Franky hears it, and calls Sofia. Luz turns her off and tells Sofia Franky was to insane. Luz must tell the password. Once Sofia gets into Franky’s system, Luz hypnotizes Sofia and removes Franky's latest memory.

In love with Christian

Luz tells Franky that if she returns to Christian, she will destroy her system. Franky decides to protect Luz and to not be with Christian. In school, Franky tells Chris about Luz' feelings. Chris talks with her, but Luz hypnotizes him and kisses him. Soon, the androids finish school and make a party. But on the party, Christian kisses Franky, and Luz angrily runs out. Franky talks with Luz, but Luz responds she just is a mistake between Franky and Chris.

Luz calls Dóminus and informs him about the new plan. She leaves Franky's house and hides in Tamara basement. She sends them an email why she's gone and why she will never return. The rest of the family goes searching for her. Luz sends an email that she must never be with Chris so she might return. But Tamara tells the truth about Luz' goal. The Andrade family asks why Luz wants Franky and Chris to breakup. She responds that she thought she might lose Franky.

That evening, Luz sends an video of an android to Franky, which is an Virus Of Lies. Franky keeps lying all the time. Sofia removes her Virus.

That night, Clara steels Luz' device to travel in time and with Franky they go back in time. They land in Sofia's house twenty years ago. Franky ruins the meeting with Sofia and Wilson. Clara starts disappearing. Meanwhile, in the future, Luz brings Franky back to the present timeline. Luz helps Franky save her sister, and Franky fixes her mistake. She comes back to the present timeline with Clara.

That Night, Franky and Clara decides to abound Luz, unless she tells the truth. Luz tells about her mission and Dóminus, then hypnotizes Clara and tells her she doesn’t remember anything accept mom’s birthday. She hacks into Franky’s system and puts her video clips of the time-travel into a folder. She informs Dóminus about her adventure.

The next day, an man named Victor comes to the Franky’s family and asks if they agree for dolls of Franky. They don't. Luz reeds his mind that he will make the dolls without their agreement and assists him in it. She records evil sounds of Franky, and informs Dóminus about that. The humans start to hate Franky, but her friends, Roby, Dulse, and Trece break into the hideout of Victor, and force him to tell the truth about the truth, who makes the evil voices of Franky. They ask Luz why is she recording the evil sounds of Franky. Luz lies that she would never do that cause the Andrade family accepted her, and they believe her. The friends of Franky attack Victor and take away his dolls.

Luz attempts to remove Franky's time-travel videos, but she never has a good moment.

Dóminus informs Luz to go to the basement. Once Luz arrives, she sees The Clone Of Christian. The Clone Of Christian orders Luz to hypnotize the original Christian and trap him. The Clone goes on a date with Franky and starts to offend her. Meanwhile, Luz tells the original Chris to make a surprise date in the basement, once all is done, Luz traps Chris in the basement. The Clone hacks into Franky’s system and removes her time-travel files. He sees Tamara and wants to ask her for a date. Franky leaves and informs Delphina about it. Ramon frees Christian, but Christian meets Luz and he gets hypnotized. The Clone and Luz discuss a new plan, and Christian wakes up. Luz hypnotizes him again and tells him that his clone is just a dream. The Clone soon gets discovered by Delphina and Franky. Chris wakes up and leaves the basement. Franky and her friends start their plan to discover who created the clone. The clone meets with Tamara and invites her on a date what the original Christian prepared for Franky. Luz contacts Dóminus in the laboratory of Sofia and informs Dóminus about the plan of Franky and her friends. Dóminus orders the Clone to do project violet. Once Luz gets out of the laboratory, she sees Sofia who asks her what was she doing in her laboratory. 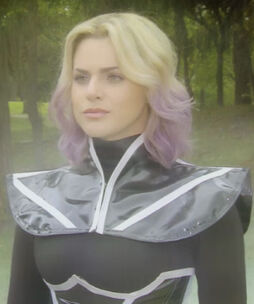 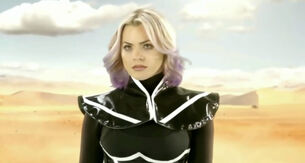 Luz in the desert