Kill her husband and get all the money so she and Harter (all failed).

Lydia is the secondary antagonist from the Farrelly Brothers film, The Three Stooges.

Lydia first witnessed the Three Stooges looking for a way to raise $830,000 to save the orphanage they grew up in, and offers them exactly that amount of money to kill her husband.

When the man claiming to be her husband (Teddy's best friend) was hit by a bus and placed in a hospital, they went to Lydia to collect the reward, thinking he was dead. She threw them out once she revealed to them he wasn't dead.

Later at Teddy and Lydia's anniversary party, she drugs Teddy to get him to "accidentally" fall to his death, but her plan is averted by the Stooges. However, Teddy's father, Mr. Harter, steps in at the last minute, revealing Lydia was an accomplice in his attempt to get Teddy's money (he only married into money and all of it was left to Teddy by his adoptive mother).

The Three Stooges once again stop their plans by driving the car they were taken in to a nearby lake, when law officers arrived shortly after. 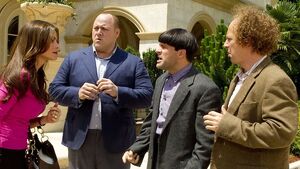 Lydia gets so mad as The Three Stooges are still dealing with her.
Add a photo to this gallery
Retrieved from "https://villains.fandom.com/wiki/Lydia_(The_Three_Stooges)?oldid=3569853"
Community content is available under CC-BY-SA unless otherwise noted.