Scam rich towns into building expensive monorails and purposefully sabotage them so he could leave the towns in ruins with their money (succeeded for a while).

Lyle Lanley is the main antagonist of The Simpsons episode "Marge vs the Monorail". He is a con artist who sells expensive, but purposefully low-quality monorails to towns who have a lot of money.

He was voiced by the late,Phil Hartman who also played Ted Maltin in Jingle All The Way, Tom Morgan in The Pagemaster, and Major Colin Thorne in Sgt. Bilko.

Lyle wears something resembling a 1920s-barbershop outfit. He wears beige pants, a beige vest with a red jacket and a red bow tie. He wears a brown hat with a red band, and he has blond, curled hair. He also has noticeable smile-wrinkles.

Lyle is very charismatic, cunning, smart-spoken and also comedic at times. He can easily grab everyone's attention and is a great showman. He can easily get people to like him. He has his own way of manipulating everyone into believing him. Lyle is good at avoiding questions by flattering the asker and distracting them. Underneath he is actually an egotistical, scheming and greedy person, who doesn't care if people die because of him.

When Mr. Burns was forced to pay 3 million dollars to Springfield, the town held a meeting to determine what the money should be spent on. Lyle appears and states he has a great idea, but then stops himself and states it would probably be better for Shelbyville. Since this is Springfield's rival town, everyone assures him that it'll be good for them. So he presents them with the monorail plan he has. He tells everyone that every great town has one and that he has sold many to other towns. They cost a lot of money, but he is charismatic enough to convince everyone they are a good investment. Lyle starts to sing a musical number explaining all the benefits of the monorail. Near the end, everyone tunes in, and they all finish singing together.

The next day, Lyle shows up at school and lets the kids ask questions about the monorail. Lisa confronts him about why their small town would even need it and is suspicious. But he replies that only someone as smart as she would understand the answer anyway and no-one else would, which flatters and distracts Lisa, from the fact that he didn't answer her question. He also has a commercial on TV where he speaks to lazy couch-potatoes and suggests they try out monorail conducting. During the meeting for the latter, he nonchalantly asks all investigative reporters to leave. For the rest of the introductory course, he teaches them next to nothing and then randomly assigns Homer to be a conductor, not caring about how unqualified he is.

When Marge finds an opposed family in the monorail, she checks by his trailer. She enters and finds his notebook, where he doodled a picture of him flying to Tahiti with all the money. It also shows a drawing of him with money and people on a burning monorail. Lyle then catches her and asks her what she saw. She acts clueless and leaves. Lyle talks to himself about why he always leaves it lying around. Marge decides to visit one of the towns he sold a monorail to and finds it to be desolated and run down. People seem traumatized by the mention of the monorail. The builder hired by Lanley then informs her that it crashed and the passengers died. He also reveals that Lyle cut corners everywhere and it was already built in a horrible condition.

On the day of the maiden voyage, the entire town is excited. Lisa sees Lanley leaving in a car with suitcases filled to the brim with cash. She asks if he'll ride the monorail with them. But he states he's in a hurry which confuses Lisa since the ride only takes a minute. He nervously replies, his plane leaves in less than one and drives away. The monorail accident is luckily averted however through a convenient eclipse since it is solar-powered. Meanwhile, he sits in his plane, where the speaker mentions a short landing in one of Lanleys' previous cities. Lyle reflects shortly about where he heard that name before when it hits him, and he is terrified. An angry mob rushes the plane, and they attack him with torches, bats, pipes, scythes, chains, and pitchforks. The entire plane shakes, as they presumably beat him to death, and he screams in pain. 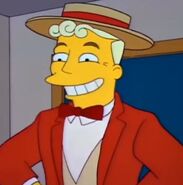 Retrieved from "https://villains.fandom.com/wiki/Lyle_Lanley?oldid=4185097"
Community content is available under CC-BY-SA unless otherwise noted.