Villains Wiki
Register
Don't have an account?
Sign In
Advertisement
in: Mature, Partners in Crime, Greedy,
and 33 more

Lyle Lipton and Loopty Goopty are two villainous scientists from the web series Helluva Boss, which takes place in the same universe as Hazbin Hotel. They appear in the episode "C.H.E.R.U.B".

Lyle Lipton and Loopty Goopty ran Lyle-Loopy Robotics, a wealthy tech corporation that often used poor people as guinea pigs for its inventions. One day, however, the two decided to test out their latest creation—a machine that could age or de-age someone—on themselves because they were confident that it would work. Unfortunately, they set the machine to "old" instead of "young", which resulted in Loopty aging to death and Lyle becoming a fat and decrepit old man.

In Hell, Loopty, realizing that his partner will get all of the money from their creation, hires the I.M.P to kill Lipton. Blitzo thinks that this isn't "evil enough," but Loopty insists that it is and sends the I.M.P on their way, stating that he will be waiting for his partner once he arrives, brandishing various weapons while doing so.

On Earth, Lipton tries to kill himself with an IV tube because he feels as though his body is immaculate; then the polar opposite of the I.M.P, C.H.E.R.U.B, arrives and tries to convince him that life is worth living for. Throughout the episode, C.H.E.R.U.B tries to show Lipton all of the wonders of life, such as nature, happy children, and opera, but the I.M.P always finds a way to ruin it for him, which causes him to become more and more depressed. Eventually, C.H.E.R.U.B gets tired of the I.M.P's antics and tries to kill them, setting off a chain of violence that makes Lipton have an epiphany: if these two groups from Heaven and Hell are battling over him so much, then his life must be more important than he thinks. Happy, Lipton declares that we must cherish life and that he no longer craves death, but then he gets smashed by a piano, which fell on him partially due to member of C.H.E.R.U.B.

Now in Hell, Lipton reunites with Loopty, who is happy that he is there despite previously implying violence against him. The two wonder what they will do now that they're in Hell, but then Wally Wackford shows up and offers to employ them. As of now, its unknown whether they took up his offer.

The duo loves money, and will do anything in their power to get it, even if that means using poor people in their experiments and polluting the Earth. They are also talented inventors, creating things such as the De-Age-Ifier and various other devices. They seem to respect each other very much, but that may be only due to their shared intelligence, as Loopty wanted Lyle dead out of fear of him becoming rich while he, Loopty, remained in Hell.

Loopty shows to be overly eccentric and wacky, speaking in a singing-like voice and openly showcasing his oddity. He has proven to be mocking and condescending towards others, as shown when he told Loona to shut up while calling her a furry (enraging the Hellhound in the process). He also shows to be highly petty, vengeful and surprisingly menacing, as he wanted the I.M.P squad to kill his business partner in the living with intentions on enacting eternal revenge on him in Hell. Loopty's dangerous and unhinged personality extends to the point where he can even unsettle and frighten someone like Blitzo.

Following the incident with the De-Age-Ifier, Lyle had become very depressed thanks to the machine making him a decrepit and bed-ridden old man. This resulted in Lyle becoming suicidal and craving death, although he eventually saw light again upon seeing how the imps and cherubs were fighting on his behalf, as well as realising that he could still enjoy his wealth. This was cut short after he was crushed to death by a piano thanks to the fight between I.M.P. and C.H.E.R.U.B. It is revealed however, that Lyle's sins of experimenting on poor people landed him a place in Hell and he remorselessly chuckled over this, proving that the two are just as heartless as each other. 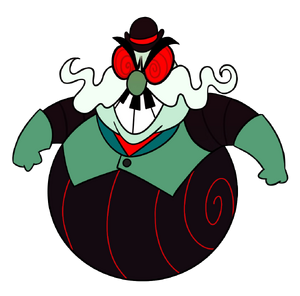 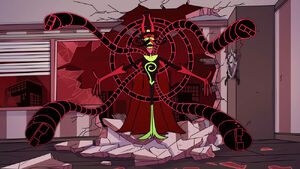