Save Grado from its impending destruction.

Lyon is the secondary antagonist of Fire Emblem: The Sacred Stones. He is the childhood friend of Eirika and Ephraim, and the Prince of Grado.

Lyon is a gentle person who greatly admires his close friends, Eirika and Ephraim, princess and prince of Renais respectively. His greatest ambition was to be a strong ruler to protect his empire but harbored feelings of uselessness fueled by his weak health, his one-sided feelings for Eirika, and his hidden jealousy of Ephraim.

Once Fomortiis possesses him, he can have two different personalities, based on the route chosen.

In Eirika's route, he is fully possessed by the Demon King, and goes in and out of possession. When he is unpossessed, he is his usual, calm self, but far more anxious than usual. When possessed, he speaks like a madman, and constantly speaks of death and destruction, and other terrible things.

In Ephraim's route, he is unaware of the fact that Fomortiis is manipulating his emotions, and holding back his true self. This makes him arrogant, as he believes he has full control over the Demon King, even bragging of it to Morva before slaying him. He is too ashamed of what he is doing to be honest with Eirika, and pretends to be fully possessed by Fomortiis. However, he reveals the truth to Ephraim, and speaks normally to him, but harbors hatred towards him.

Once he is finally freed of the Demon King, he briefly returns to his normal self, but succumbs to his wounds too early.

Lyon was a childhood friend of Eirika and Ephraim, often getting to meet with them in meetings between Renais and Grado. He had an innocent crush on Eirika, and had a brotherly relationship with Ephraim, though was jealous that Ephraim was so close with Eirika. Eventually, he stopped seeing them, as his father had taken ill.

Lyon worked desperately to save his father's life, and began to tap into the Fire Emblem. He discovered that if he used it correctly, he could reanimate the dead, though it still needed work to fully return the person to life. His father unfortunately passed away, sending him into a research frenzy, which his associate, Knoll, disapproved of. He eventually caused it to split the Stone in two halves, one of which was still a Sacred Stone, the other of which was the Dark Stone, which now contained the Demon King's spirit. However, when Lyon tried to use the Dark Stone, he fell under the Demon King's influence and saw a vision of a massive earthquake that destroyed Grado, and killed several people. He was convinced that he might be able to avert the disaster by reviving the Demon King and harnessing his power. He sent Knoll to be executed, and used his father's corpse as a puppet, mainly to declare war on the rest of the land. He became associated with a priest of Fomortiis named Riev, who assisted him in his war on the world.

As the story progresses, depending on the route taken, he is either completely possessed by the Demon King, who imitates his soft persona to convince Eirika to hand over the Renais Sacred Stone, or fakes possession (so as not to reveal the truth to his friends) and takes the Sacred Stone from Ephraim by force before revealing himself.

In the last chapter, he is killed and dies in the arms of his friends, then serves as the final sacrifice needed to revive the Demon King. Fomortiis is slain, and Lyon is finally put at rest. Unfortunately, the earthquake he worked to prevent occurs anyways, seen by some kingdoms as divine punishment for Lyon's actions.

Lyon appears as a primary advanced grab-type spirit with the ability to increase the fighter's magic-based attacks. His spirit battle is against Robin on the Unova Pokémon League. After defeating him, a giant Ridley appears representing Formortiis. 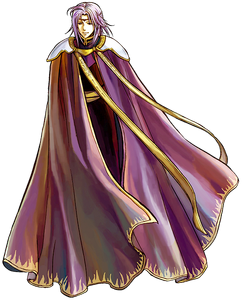 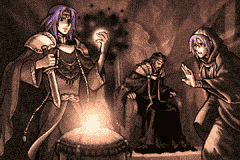 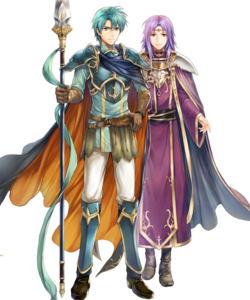 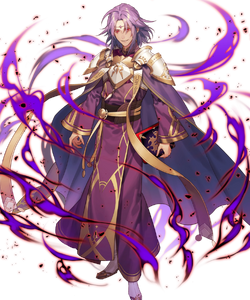 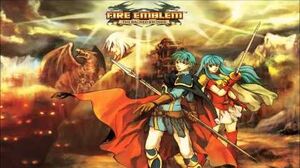 Retrieved from "https://villains.fandom.com/wiki/Lyon_(Fire_Emblem)?oldid=3933341"
Community content is available under CC-BY-SA unless otherwise noted.