Destroying anything he finds in his path.

Get his revenge of Zeus and the Olympians (failed).

Lythos, also known as the Rock Titan and The Mountain King, is one of the supporting antagonists in Disney's 35th full-length animated feature film Hercules. He is one of the Titans that were imprisoned by Zeus, and seeks revenge on the Gods of Olympus. He also appears as one of the bosses in Kingdom Hearts.

Lythos is a mountain-sized, two-headed humanoid monster made entirely out of dark-colored rock. He has two powerful arms and glowing red eyes and mouths. His massive barrel-shaped torso is supported by two stumpy legs, which detach and reattach from his body as he walks.

Like the rest of the Titans, Lythos' is very single minded and destructive, and he wants only to cause mayhem and destruction. When freed from his prison by Hades, he immediately sides with him along with his brothers to get revenge on Zeus for imprisoning him. Lythos is also shown to be somewhat dim compared to his brethren, needing Hades to point the way to Olympus.

Being a Titan, Lythos is immortal, possesses superhuman strength, and can generate powerful earthquakes.

Lythos was one of the Titans that were defeated and imprisoned by Zeus. A few thousand years later, Hades released the Titans, including Lythos. The Titans managed to take over Mt. Olympus, but after that, Lythos was defeated when Zeus destroyed his heads and Hercules uses Stratos to suck up Lythos and the other two Titans and then flings Stratos and the others into outer space, killing them.

Lythos is a recurring boss in the Kingdom Hearts series.

In Kingdom Hearts, the Rock Titan is the final boss of the Hades Cup. His defeat increases Sora and company's teamwork, granting them the Trinity Limit ability.

The Rock Titan makes a cameo in Kingdom Hearts II, where he is defeated by Hercules by the time of Sora and company's arrival at Olympus Coliseum.

In Kingdom Hearts Re:coded, a data version of the Rock Titan is one of the four sources of bugs inside the Olympus Coliseum's Keyhole, residing in the 15th layer. He is subdued by Data-Sora, Hercules, and Cloud.

The Rock Titan reappears in Kingdom Hearts III, where Hades uses him and the other Titans to capture Zeus like in the film. The Rock Titan. is fought as a boss twice, the first time being on his own on the cliffside of Mount Olympus, where it falls down the cliff after being defeated. The second time is with Pyros and Hydros on the summit, having somehow survived the fall off of the cliff. After Sora defeats the three Titans and Stratos, Hercules flings Stratos and the other Titans into outer space like he did in the film. 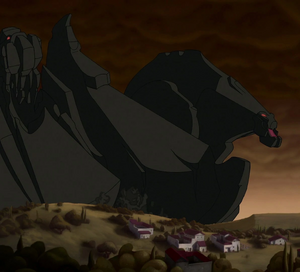 Lythos on a rampage. 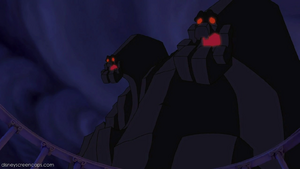 Lythos about to face Zeus' wrath.