2,000 years ago (before the events of Vagrant Story)

Mystical powers of the Dark

To embrace the powers of the Dark in the name of the Dancer-Priestess.

Destroy the Order of the Crimson Blades.
Pass the mystical Blood-Sin tattoo onto new followers.
To bring about the destruction of Leá Monde, to await the end of the world.

Müllenkamp (spelled Mullenkamp) is an ancient and religious cult in Vagrant Story. The name of this powerful and religious organization is derived from the legendary Dancer-Priestess of Kiltia who based her activities in the cursed city of Lea Monde. Sydney Losstarot took up the name when he created his cult based upon his own powers of the Dark and became both their leader and prophet.

Müllenkamp (魔導師メレンカンプ, Madoushi Merenkanpu, lit. "Magician Müllenkamp") (given the first name of "Osana" in the French version) was a dancer as well as the head priestess of Ancient Kiltia, a known ancient religion reconignized by all in the world of Ivalice. She founded the city of Leá Monde 2,000 years before the story begins, gathering enough followers into her worship of the powers of the Dark. With the powers of the Darkness, she was able to create Grimoires that hold within them powerful magicks. She bore with her the tattoo known as the Blood-Sin, which is the key to the powers of the Dark her city contained. This tattoo is carried over across her lineage, until centuries later it falls upon the House of Bardorba, particularly Sydney himself.

Using his ability to see inside people's minds, Sydney was able to build a group of fanatical followers, who offered him "body and soul". Though the cult was hated by the Order of the Crimson Blades, it survived due to the funding of the Duke Aldous Byron Bardorba. They are suspected of attempting to kill the king of Valendia on the Yuletide before the events of Vagrant Story.

In a surprise move, Sydney sends his followers to bite the very hand that fed them by attacking the Duke's home in the Graylands. Müllenkamp captured the Duke's family, and made the pretext of two ransom demands: the freedom of their captive members and the abdication of Cardinal Batistum. The Crimson Blades attack suddenly, killing many of the sect's members. The attack seems a failure, though it succeeded in capturing the Duke's young son, Joshua. Sydney survives, and leads the Crimson Blades to the Müllenkamp base in Leá Monde. Müllenkamp's second-in-command, John Hardin tries to convince Sydney to flee, but to no avail. Slowly the entire cult is destroyed in the battle, but they took the Crimson Blades with them. With the final destruction of Leá Monde, and the passing of the Blood-Sin tattoo to Ashley Riot, Müllenkamp fulfills its purpose that was envisioned by Sydney and his father, the Duke. 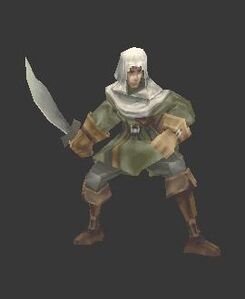 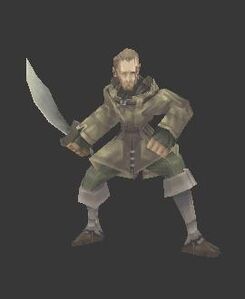 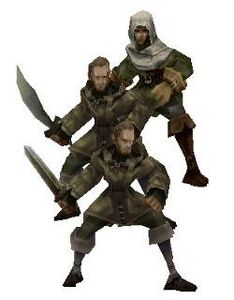 Retrieved from "https://villains.fandom.com/wiki/M%C3%BCllenkamp?oldid=3529298"
Community content is available under CC-BY-SA unless otherwise noted.