Hands that can suck salt from its living victims

Extracting salts from its victims.

Feed off salts from whomever it can get its hands on to survive.

The M-113 Creature is an antagonistic alien from the Star Trek: The Original Series episode "The Man Trap".

So-called because its home planet was M-113, the M-113 Creature was the last of a species of shapeshifting aliens that survived off of salt, often sucking it out of other living beings. Before the Enterprise visited M-113 in 2266, it had already killed and taken the place of Nancy Crater, an old flame of McCoy's and wife of Professor Robert Crater. Robert Crater was aware that the creature was not his wife, keeping it alive in the form of Nancy because he didn't want to kill the last of a species. He had tried to get a shipment of salt from the Enterprise, but the creature began killing Enterprise crew members and assuming their shape. McCoy eventually shoots and kills the creature, despite it taking the form of Nancy.

The creature is both very strong (it is able to overpower Spock), and smart enough to fool people into thinking that it is human. It appears to have some sort of telepathic powers that allow it to appear trustworthy or appealing to anyone it comes in contact with. Its entire drive seems to be survival by consuming salt and most likely doesn't see humans as anything more than a food source.

Another one of its species was seen in the episode "The Squire of Gothos", though this one was already dead, stuffed and on display, and Trelane destroyed it with a phaser. 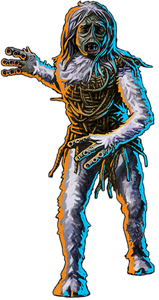