Destroying everything and everyone in his path.

MAN is the villain protagonist of an animation titled the same, that got uploaded on YouTube on December 21, 2012. The MAN also re-appeared on April 26, 2020 in the second part.

The video starts off in a jungle. The MAN appears after 500.000 years in the jungle. As he spawned, all animals around him ran away, as he wears a t-shirt saying "Welcome", as he waved. The MAN goes on, as he found a little bug. He looked at it, as he steps on it. After he found two snakes, he makes boots out of them, and wears them. Then he found a chicken. He first placed toxic waste inside of its mouth. Creating the chicken into looking like a ball, playing basketball with it, as he placed the chicken inside of a fryer, making KFC of it.

As the MAN goes on, he found a goat and a sheep. He first pets the goat, after he cut its legs with a butcher knife, eating its meat, as he shaved off the sheep. After the MAN took his pistol, shooting the birds to death. Then he faced a seal. He hit the seal onto its head, taking its skin, making clothes of it. The remains of the seal were only its skeleton. As the MAN goes on, a huge elephant was running towards the MAN, as the MAN took his magic stick, making a piano of the elephant.

After, the MAN went onto its boat, pushing multiple barrels of toxic waste and garbage inside of an ocean. As the MAN placed a net inside of the water, capturing an infinite number of random fishes. The MAN then went on an island. He first shot two moles as he saw a mother bear with its child.

The mother started to roar at the MAN, trying to protect its child, as the MAN took his pistol, shooting the mother bear to death. He even sliced her head off, making a trophy of it, and he took the child bear into a cage, & jumped on a tiger, killing it to death.

The MAN then used its magic wand to make all trees into papers and built cities, roads, buildings, and vehicles. As the MAN goes on, he started making factories. As in the factories are pigs, cows, and chickens getting killed in factories, making meat of them. As the MAN went in his laboratory, he give bunnies immunizations for testing, making a total mess of them.

In the end, the MAN went on its tower of the crash, sitting on his king throne. As aliens went on earth, confused looking around for answers what happened on earth. As the two aliens saw the MAN sitting on his throne, they took him by his leg, jumping on him, making a block of him. The aliens left earth, as the MAN stayed in a position that he couldn't get out. Only seen this on the man is his shirt saying: 'Welcome'.

On April 26, 2020, Steve released a second part of the MAN. In this video, because of the Corona-Virus (COVID-19) situation, the MAN is seen trapped inside of his home. While outside, all the animals which MAN killed, re-appeared, together in same locations, living life. The trees also gathered dancing hapilly, with the animals in joy. In the end, the MAN gets out from his home, and all of the animals with trees run away. The MAN saw the little insect again, squishing it to death, restarting his first massacre. 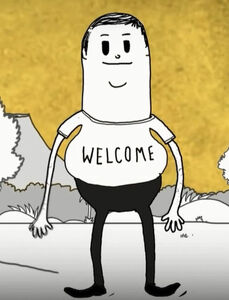 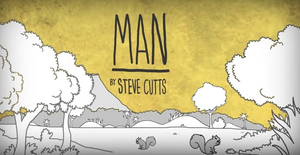 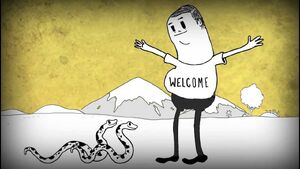 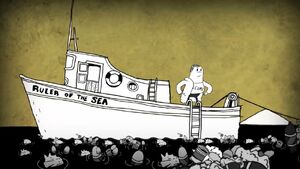 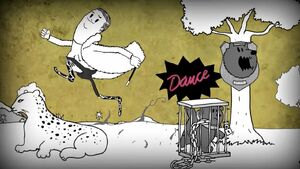 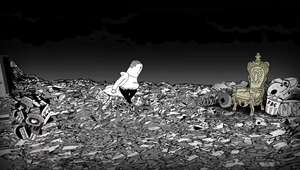 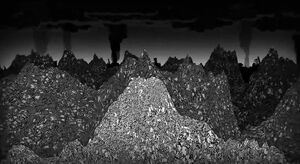 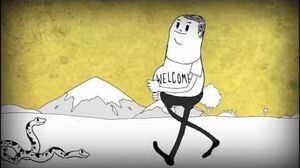 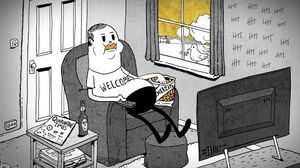 Retrieved from "https://villains.fandom.com/wiki/MAN?oldid=3890660"
Community content is available under CC-BY-SA unless otherwise noted.