Kill whomever opposes them.

The MERCs are an antagonistic faction in Madness: Project Nexus 2. They are one of three enemy factions in the game, with the other two being the A.A.H.W. and the Nexus Core. They are a barely functioning group that roams Nevada, with some of their members being former A.A.H.W. units. However, the incident at the Nexus Core allowed its leaders to seize the weapons and means to train its units to be more effective.

Class 0s are newly conscripted MERCs with low skill. Despite their low skill they frequently dual-wield. Many of them are dropouts from the A.A.H.W. They are often used as a distraction so that more specialized classes can work behind the chaos they create.

Class 2s serve as snipers and sharpshooters. Unlike Class 1s they don't wear any armor. They typically rifles, and fire in single of short bursts. They also tend to keep their distance from a battle, to both avoid getting hurt and to provide an effective range.

Class 3 is the most effective and elite type of gunner. They are covered from head to toe in heavy armor that provide no "weak point." They favor TMGS and Automatic Shotguns, and are usually seen with swarms of Class 0s and 1s.

MERC Captains lead small squads. They are typically moderately armored and buff the morale of any surrounding MERC units. They carry light arms and are an astonishingly decent shot. Much like Class 2 Gunners, they prefer to stay away from the fray.

MERC Sarges lead larger squads. Like Captains, they influence the morale of nearby units but their buffing range is far wider and can affect soldiers several rooms over. They also possess greater firepower than captains. 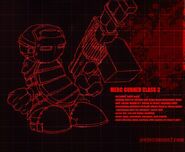