MT2 (Banchou in Japan) is a three-headed Demon Beast that appears when the Dedede Academy School is built for the second time. He is comprised of three unruly school bullies, Dirk (グレ, Gure in Japan), Kirk (ヨタ, Yota in Japan), and Smirk (パンチョ, Pancho in Japan, similarly named to the fusion of all three). All three appear in the episode, The School Scam.

Dirk, Kirk, and Smirk came to the Dedede Academy, which was a school for the Cappy kids. Later, the three punk kids were humiliated and insulted by Tiff in front of the whole classroom, and were knocked out and unconscious, which looked like they were dead. Later, however, when Tiff's back was turned, a purple rope constricted around her body. That purple rope wasn't really a rope but Kirk's purple mohawk. Smirk, Kirk, and Dirk were back in business. They had merged together to form MT2 to get revenge on Tiff for humiliating and insulting them in front of the whole classroom, but first, they wanted to get rid of Kirby.

MT2 is a skilled brawler. He can use Dirk as his propeller, and is capable of spewing out school supplies from his mouth. MT2 also uses Kirk's mohawk as a weapon, to whack or grab, slam, and throw opponents with. After he vowed the three punk kids' revenge against Tiff, the other kids threw their school supplies at MT2, who in return spewed out some of his own school supplies at them, which Kirby inhaled to become Fighter Kirby. The battle was starting to heat up, especially during a part of the fight with an electric fence. Kirby had some trouble with MT2 at first, of course, but eventually knocked down the fence, and then destroyed MT2, taking out the Dedede Academy for the second time with him.

Dirk is a fish-looking monster who can't resist having fun picking on people, especially the teachers. He is good friends with Kirk and Smirk, and the three are often seen hanging out together, always causing trouble at the Dedede Academy.

When Dirk, Kirk, and Smirk merge together to become MT2, Dirk becomes the bottom head of MT2, being used by the three-headed monster as a propeller.

Kirk is a rock and roll looking teenage monster with a purple mohawk, who, like his friends Dirk and Smirk, loves nothing more than causing trouble at the Dedede Academy. He uses a golden nunchuk-like chain as his weapon, and his ability to use his mohawk comes in handy for him.

When Dirk, Kirk, and Smirk combine to form MT2, Kirk becomes the monster's middle head, after which his mohawk gets moved to the top head, which is Smirk's head.

Smirk is the leader of the three school bullies, a bulldog-looking monster who takes charge of the trouble caused by him and his two bad buddies. He, too, enjoys causing trouble for everyone, and likes to kick back and take it easy.

When Dirk, Kirk, and Smirk combine together and turn into MT2, Smirk becomes MT2's top head, after which Kirk's purple mohawk gets moved to Smirk's head.

Dirk is a fish-looking monster with a single tooth in his mouth. He wears black jeans and black Western-style boots with purple laces and silver stars on their sides. He wears brown gloves and has orange spines and a red star and white lightning bolt tattoos over his eyes. Sometimes, Dirk is seen wielding a bokken.

Kirk is a teenage bully who wears blue leather boots with shoelaces, a red shirt, a blue vest over it with golden chains, and blue sunglasses with yellow linings. He has purple Indian-style tattoos on his cheeks, wears red-and-yellow headphones with lightning bolt pictures on them, and he has a purple mohawk. He sometimes carries a golden nunchuk-like chain as his weapon, which he hurls at opponents.

Smirk is a bulldog-looking monster who wears a black, Gothic shirt with white stripes. He wears blue shoes with red shoelaces, a torn red vest, spiked shoulder bands, red wristbands, and a red army hat, and he has scars next to his eyes. Both Dirk, Kirk, and Smirk are very Gothic in appearance.

MT2 is a fusion of Dirk, Kirk, and Smirk. He looks strikingly like the Knight chess piece, and has three round heads connected from top to bottom by golden collars with white spikes. The bottom head, which is Dirk, has multiple purple feet that MT2 can rotate to use Dirk as his propeller. Dirk has blue eyes and retains the star and lightning bolt tattoos over his eyes. The middle head, which is Kirk, also retains Kirk's purple Indian-style tattoos on his cheeks and his blue sunglasses with the yellow linings. Lastly, the top head, which is Smirk, retains Smirk's bulldog-like face and the scars that are next to his now-glowing-orange eyes. In addition, Kirk's purple mohawk is moved to Smirk's head. Dirk, Kirk, Smirk, and MT2 are also some of the few monsters who can talk. 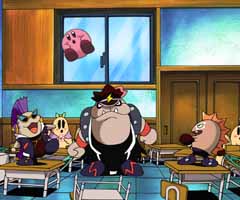 Dirk, Kirk and Smirk.
Add a photo to this gallery

Retrieved from "https://villains.fandom.com/wiki/MT2?oldid=3316336"
Community content is available under CC-BY-SA unless otherwise noted.