Feeding off of radiation.

She is the parent subspecies of the two M.U.T.O.s which fought Godzilla in San Francisco back in 2014. M.U.T.O. Prime emerged shortly after their death to draw out Godzilla. Gradually weakening him over the course of several brief encounters, M.U.T.O. Prime aimed to infect him with her parasitic larvae, potentially giving rise to an entire ecosystem of M.U.T.O.s which could wipe out the human race.

Fortunately, through the intervention of Monarch's Dr. Emma Russell, Godzilla was able to triumph over M.U.T.O. Prime in their last encounter and killed her once and for all.

The mother of the two MUTOs that were slain by Godzilla, MUTO Prime emerged in 2014, where she attacked a United States military base in Guam from the underground, following a series of earthquakes that traveled there from Japan. Her assault soon caught Godzilla's attention, who realized his mission to stop the MUTOs is still far from over and engaged her as she feeds on a nuclear submarine just offshore. MUTO Prime, however, punched Godzilla aside before retreating, leading to a cat-and-mouse chase between the two Titans which culminated at Athena II Nuclear Power Plant in France, at which MUTO Prime came close in avenging the deaths of the two MUTOs by nearly infecting Godzilla with her ovipositor. However, Godzilla slashed her in the face before the two roared at each other as their fight ends in a stalemate for a time being.

MUTO Prime's emergence caught the attention of Monarch, who then track down the kaiju as they are putting pieces together. Their investigation concludes the fact that the new MUTO is the parent subspecies of regular MUTOs encountered so far as well as the mother of two MUTOs whom Godzilla slain at San Francisco. Dr. Emma Russell, one of Monarch's scientists, proposed to replicate the sonic pulse which was given off by the MUTO eggs, which she deduced signaled to their mother that they were safely implanted inside the host and would pacify her. With MUTO Prime sighted heading to the Azores in Portugal, this plan was set into motion, with powerful loudspeakers emitting the pulse as MUTO Prime burrowed underneath them. However, this had the opposite intended effect, causing MUTO Prime to burst from underground, killing nearly everyone involved in the operation.

Against the lack of faith in the government, Emma and Tarkan set up the ORCA prototype to properly replicate the MUTO egg pulse underground in hopes of creating a more desirable effect. As this happens, MUTO Prime arrived at a storage site for decommissioned nuclear submarine power cores with Godzilla hot on her tracks. As the two kaiju clashed once again, Emma and Tarkan activate the signal soon after MUTO Prime shattered Godzilla's dorsal plates, causing her to hesitate just long enough for Godzilla to recover and lift MUTO Prime onto his back and unleashed his nuclear pulse in point-blank range, launching MUTO Prime into the air, severing some of her limbs and sending her crashing back to Earth. As MUTO Prime lay on her back, Godzilla quickly walked over to her and stomps on her head, crushing it and finally killing her.

M.U.T.O. Prime is nearly identical in appearance to a regular female, except for several notable differences. She was significantly larger than the regular female, has a hardened outer shell covered with razor-sharp back spires, large clawed forelimbs covered in orange scales, as well as several smaller pairs of forelimbs protruding from her abdomen. Her jaws are more defined, along with larger and sharper mandibles. Prime's exoskeleton is metallic-black in color, and she possesses two red visor-like eyes. Protruding from offices in her skull are four arrow-shaped ovipositors with an orange bioluminescent hue. Unlike regular females, Prime walks on four legs instead of six, as it appears that some limbs were fused during the process of metamorphosis. The hind limbs are tridactyl, ending in three claws as opposed to the hooves of regular M.U.T.O.s. Though her exact height is never stated, M.U.T.O. Prime was much larger than Dagon and was also 50% heavier than Godzilla.

MUTO Prime, the greatest of MUTOs, was shown to be much more aggressive and driven than her progeny, as she uses hellbent in turning Godzilla into another of hosts of her parasitic eggs just like she did on his predecessor Dagon. As with other MUTOs, she also cared with the well-being of her brethren, as MUTO Prime emerged as soon as Godzilla killed the MUTO couple which confirmed to be her children, hinting that she also sought revenge over their deaths. 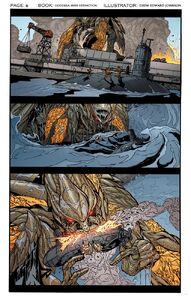 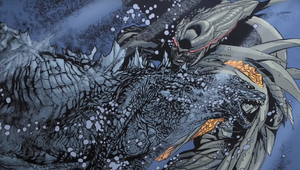 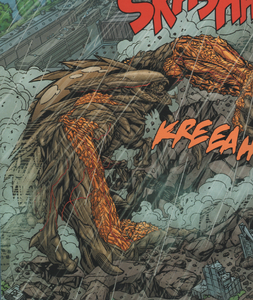 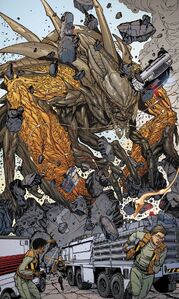 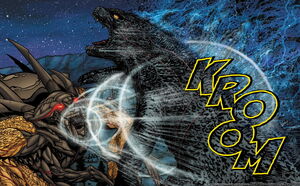 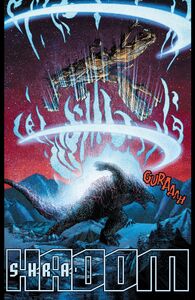 MUTO Prime blasted into the air by Godzilla with his nuclear pulse. 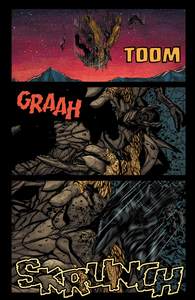 MUTO Prime being delivered a last blow in her fight with Godzilla when he violently stomps on her face. 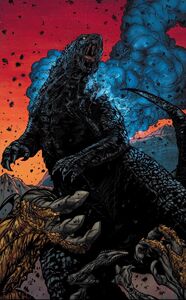