Take over Mega City One.
Kill Judge Dredd and Judge Anderson (all failed).

Madeline Madrigal, better known as Ma-Ma and also called "Ma", is the main antagonist in the 2012 sci-fi/action film Dredd. She is a psychotic former prostitute turned drug lord with a trademark for excessive violence. She is the powerful and ruthless leader of a criminal organization known as the Ma-Ma Clan and the person responsible for the distribution of the new addictive drug called Slo-Mo.

She was portrayed by Lena Headey, who also played Cersei Lannister in Game of Thrones, Aunt Grandma in Uncle Grandpa, Morgana in Tales of Arcadia and Big Mama in Rise of the Teenage Mutant Ninja Turtles.

Starting her life out as a block whore in the Pleasure District of Sector 9, Madeline Madrigal was first arrested at age of 16 on December 4, 2076 by Judge Reich for solicitation. Madeline then went on to have numerous other altercations with the law, serving a total of 23 months in the Iso-Cubes, a total of seven arrests. Growing dissatisfied with her life, Madeline eventually had enough of a life of prostitution and killed her pimp, Lester Grimes, in a vendetta attack when her pimp brutally murdered her boyfriend Eric, and took over his interests adopting the nickname "Ma-Ma" before founding her own gang, the Ma-Ma Clan. She then proceeded to take over the top floor of the Peachtree Block. She and her enforcer Caleb slowly worked their way down, level by level, and wiped out the other three gangs: the Peyote Kings, Red Dragons and The Judged, giving her full control of the block.

Ma-Ma then used Peach Trees as the manufacturing centre for a new addictive drug called Slo-Mo, which slows the user's perception of time to 1% of the normal rate. After making an example killing of three users she attracted the attention of Judge Dredd and the on assessment rookie Cassandra Anderson. When Kay got busted, she at first felt it wasn't serious because she knew her gang was overdue for a bust until she found out that Kay is alive, not dead. In order to prevent her lackey Kay from talking in interrogation at the Grand Hall of Justice she shuts down the whole block locking the two judges inside.

Ma-Ma sent her whole gang and also some Corrupt Judges after Dredd and Anderson but the two survived and worked their way up the block to her. She also had no reservations whatsoever about resorting to ruthless means such as murdering innocents if it means protecting her own interests. At one point in the film, Ma-Ma has three miniguns mounted onto the balcony in an attempt to kill Dredd, failing and killing dozens of residents in the process. She also blames others for her own drastic actions, simply regarding in advance her atrocity with the miniguns as doing it "messy," because Dredd wouldn't allow her to it do it "clean." Also whilst berating Kay she flat out tells him he should have gotten killed to prevent himself from talking. Anderson and Dredd obtain the code to Ma-Ma's apartment from her computer expert and confront her. Ma-Ma quickly implants a device on her wrist that is set to her heartbeat. She tells Dredd that in the case of her death, the device will detonate a massive amount of explosives she has wired in the top 50 stories, bringing the rest of the skyscraper down and killing all of the residents.

Dredd shoots her in the stomach anyway and grabs a dying Ma-Ma, holding her against a glass window where she grins mockingly at him, having accepted her fate. Dredd reasons that the detonator's signal will not reach the explosives from the ground floor and tells her that she is sentenced to death for homicide and narcotics distribution, spraying some Slo-Mo into her mouth. He then asks her how she pleads and Ma-Ma responds by inhaling the drug, symbolically pleading guilty. He tells her that the defense was noted and throws her through the glass. She plummets down the atrium of the 200-story building and lands headfirst, killing her instantly.

As revealed in her origin comic, a prequel to the 2012 film, originally Madeline was a very fearful and wary woman due to the way her Pimp treated her, with him easily being able to cow her into submission, (although she did possess a hidden inner defiance towards her dead-end future as a prostitute, and is unable to accept this as her ultimate fate). However, after killing her pimp and taking his place as Ma-Ma, she develops an extremely cruel, ruthless and calculating personality. Her character by this point has developed into that of a dispassionate, emotionless and apathetic sociopath, (indifferent sometimes even arrogant or enthusiastic) towards the suffering she causes.

By the time of the events that take place in Dredd, she has become extremely desensitized to the violence around her, and has no qualms about murdering/maiming anyone who threatens her interests, or even innocent people if it suits her purposes. She is squeamish and respectable, as she commits much of this violence herself, having built much of her reputation on this. By doing so, she sets a brutal example of what she is capable of to her gang as well as the rest of Peach Trees' inhabitants. She is also shown to be very surreptitious, manipulative, and duplicitous when it comes to controlling others through fear, her effortless intimidation of the clan Techie being one the most notable examples of this, a simple glare being enough to terrify him into doing her bidding. Adding to this she demonstrates a sly intelligence, being able to think well on her feet and come up with numerous backup plans when things go wrong, even managing to bribe a group of Judges into working for her in an attempt to kill Dredd.

Although she demonstrates a strong amount of cunning and resourcefulness, she is nevertheless very reckless and spontaneous, not only with the lives of others but also her own. She is shown to be addicted to her own product: slow motion as well as other drugs, as evidenced by the pills and vials that litter her bed during her confrontation with Judge Dredd. Another notable aspect of her personality that goes hand in hand with her self-destructive nature is her distinct lack of fear when it comes to facing adversaries such as Judge Dredd and Anderson. Adding to the above, her thoughtless and impulsive attitude seems to stem more from apathy and a lack of respect for human life/suffering as opposed to hastiness or incompetence, simply put: she just doesn't care. She possesses a calm and cool confidence when encountering threats, even when cornered by Dredd, she calmly remarks that she knew she would get busted at some point given her line of work, showing no concern at the prospect of dying or any remorse for her crimes. Instead, she just taunts him with a provocative smirk before staring blankly as he sentences her and sends her to her death.

Despite her chilling brutality during the events of the film, she did display a more compassionate and humanitarian side in her prequel story, showing visible affection for her friend Eric, who attempted to help her achieve a better life before he was tortured and murdered by her possessive pimp. This event caused Madeline significantly emotional trauma and marked her turning point from a victim to the villain we see in Dredd. The way she reacted to Eric's death as well as her general attitude towards him in the story shows that at some point she was capable of caring for other human beings, despite her later apathy towards human life in the events of the film. The trauma of loosing the only person who cared for her this way, combined with the general bleakness of her situation however, caused her to conclude that the only way to succeed in a life like her own is to be brutal and unforgiving. In this sense she is arguably a tragic product of her environment. Her addiction to multiple narcotic substances may have also had a role in her destructive and violent personality shift, given that hard substances in many case can interfere with brain chemistry/activity and cause the user to be unstable and aggressive towards others.

A personal insight into her psyche given by actress Lena Headey goes as follows:

"I think of her like an old great white shark who is just waiting for someone bigger and stronger to show up and kill her.... She's ready for it. In fact, she can't wait for it to happen. And yet no one can get the job done. She's an addict, so she's dead in that way, but that last knock just hasn't come. This big, fat, scarred shark moving through the sea and everyone flees and she's like, 'Will someone just have the balls to do it? Please?'"

Due to her sociopathic nature and large capacity for ruthlessness, Ma-Ma is responsible for many acts of excessive violence as well as several flat-out atrocities throughout the film:

Ma-Ma's origin story is revealed in the Dredd 2012 prequel comic Top of the World: Ma-Ma, which goes into detail about how she turned from a fearful prostitute into a brutal drug lord, it also explains the origins of the drug Slo-Mo. 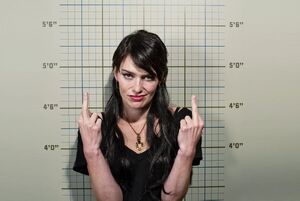 Madeline Madrigal in her prostitution days 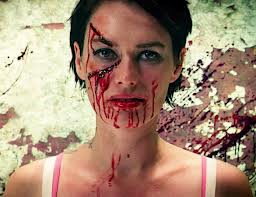 Ma-Ma in her old days as a former prostitute.

Ma-Ma with her scars inflicted upon her by her pimp.

Ma-Ma taking a bath under the effects of Slo-Mo.

Ma-Ma with her henchmen in Peach Trees Mega-Block.

Ma-Ma with her timid computer technician.

Ma-Ma and her men attempting to kill Judge Dredd with Vulan cannons.

Ma-Ma being confronted by Dredd at the top of Peach Trees.

Ma-Ma being forced to inhale Slo-Mo.

Ma-Ma is hurled through a window to her death, whilst under the effects of Slo-Mo. 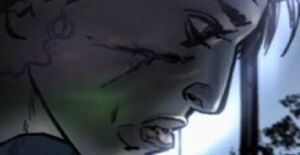 Retrieved from "https://villains.fandom.com/wiki/Ma-Ma?oldid=4136488"
Community content is available under CC-BY-SA unless otherwise noted.