Get revenge on those who wronged her through their kids (succeeded).

Sue Anne Ellington, better known as Ma, is the titular main antagonist of the 2019 psychological horror comedy film Ma, which was released by Blumhouse Productions.

She was portrayed by the Academy Award winning actress Octavia Spencer, who also played Dr. Evilini in Wizards of Waverly Place.

Teenage Maggie Thompson and her mother Erica move to Erica's hometown in Ohio where shortly afterward, she befriends Andy Hawkins, Chaz, Haley, and Darrell who invite her to party with them. As they were too young to drink, they try to persuade people passing by to buy some alcohol for them.

Eventually, they meet a veterinary technician named Sue Anne Ellington who assists them after noticing Andy's father's logo on his van. The next day, she invites the adolescents to drink in her basement, but she gives them house rules such as: one person had to be sober; no swearing in the house; no going upstairs; and they must always refer to her as "Ma." Soon, Ma's basement becomes a popular place to party as more high schoolers arrive to her house. However, Maggie and her friends gradually become annoyed with Ma's continuous methods of forcing them to perform actions she wanted.

Meanwhile, Andy's father Ben Hawkins catches onto Ma and invites her out to dinner at a restaurant. From there, he reveals that he had installed a tracking device on his son's van and threatens her to leave his son alone. It is then revealed that years ago in high school, Ma harbored a crush on a young Ben who staged a prank consisting of luring Ma into a closet so she could perform a fellatio on him. Ma fell for the bait and is publicly ridiculed and demeaned by the student body. Sometime after this traumatizing event, Ma got married and gave birth to a daughter she named Genie. While Genie appeared to be wheelchair-bound, it is revealed that Ma had been secretly drugging thus making her believe she was genuinely sick. While driving, Ma notices Ben's current girlfriend Mercedes on her morning jog. She then remorselessly runs her over and kills her. Ma draws blood from Maggie's pet dog Louie and steals the tracking device to lure Ben. Once he arrives, Ma knocks him out with tranquilizers and injects Louie's blood into his bloodstream which kills him.

Maggie is alerted to her friends deciding to throw a birthday party for Chaz at Ma's house. Stealing her mother's keys, Maggie invades Ma's house and finds that her friends had all been drugged by the mad woman. She also tortured each teenager in fitting ways such as snitching Haley's mouth shut, ironing Chaz's chest, and painting Darrell's face white. While trying to escape, Maggie uncovers Ben's corpse and is then unceremoniously rendered unconscious by Ma. A police officer is alerted to the disturbances and goes through Ma's trash. Murdering the officer, Ma wakes Andy up and forces him to kiss her only to then stab him in the stomach. She then forces Maggie to take a picture of her and the four unconscious teenagers on the couch.

Becoming aware of her daughter's disappearance, Erica alerts her co-worker Stu to drive to Ma's house. Just as she was about to hang Maggie, Genie attacks her mother and unwittingly starts a fire. Ma grabs her daughter and attempts to throw her in the fire ranting on how Erica failed to stop Ben's prank all those years ago. Maggie stabs Ma in the back and escapes alongside her mother and friends. Accepting her fate, Ma crawls back to her room and gets into the bed that Ben's lifeless body was on. 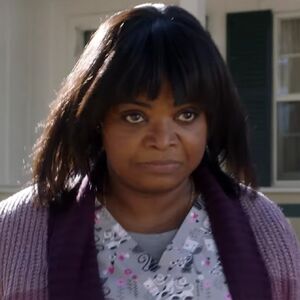 Ma
Add a photo to this gallery

Retrieved from "https://villains.fandom.com/wiki/Ma_(Ma)?oldid=3197539"
Community content is available under CC-BY-SA unless otherwise noted.