Ma was the matriarch of the Gnucci Crime Family, a Mafia-like group that appeared to have majority control of illegal activities in New York. As such, she had subtle control over both the mayor and the police commissioner. Other members of the Family included Ma's brother, Dino and her three sons, Eddie, Bobbie and Carlo.

The Punisher killed Ma's sons in order to re-announce his presence to the New York underworld. Ma hired a number of vigilantes to try and eliminate Punisher out of vengeance, but The Punisher outsmarted all of them and took the money Ma offered as a down payment. Frank intended to "wear down Ma's defenses" before actually killing her, thus he spent the next several weeks attacking Gnucci soldiers.

Finally, Frank gunned down Ma's brother Dino after a run-in with Matt Murdock. The very next night, Ma and a few of her remaining soldiers found Frank Castle outside the Central Park Zoo. Despite being outnumbered and virtually unarmed, Frank managed to fight them off, killing all the soldiers and feeding Ma to a pack of polar bears.

When The Russian arrived, Ma sent him to the Punisher's reported hideout. In the meantime, Ma was informed that she would not receive any more help in fighting Frank Castle, who had killed eighty of her soldiers in less than two weeks. Anticipating victory, Ma was shocked to see Frank appear on her front lawn holding The Russian's head. The remainder of her soldiers threw down their guns and left, saying that she "can't pay us enough to fight that." Frank then burned the Gnucci house to the ground (after raiding a safe and stealing some of Ma's money and secret documents) with Ma inside.

Six years later, it appeared that Ma Gnucci had mysteriously come back from the dead. However, her mysterious resurrection was discovered to be part of a master plan of revenge against the Punisher; masterminded by the son of the deceased high-society vigilante, Elite.

Ma Gnucci's nephew Peter realized he stood to inherit Ma's money, if the Punisher died. He hired Deadpool to kill him. When it was falsely assumed the Punisher was dead, Peter acquired his money in the form of a check. He lost it in traffic. By the time he realized he can ask the bank for a new one, it was too late. A truck bounced him out of the road, to impaled him on the Wall Street Bull statue.

The general plot of "Welcome Back, Frank" remains the same (right down to the home burning down), but the polar bear attack is not included, thus she keeps her limbs. Following the death of both of her sons at the hands of Castle, Ma retreats to the Gnucci mansion with her remaining guards in tow.

Frank blasts his way through her forces, and after disposing of Bushwhacker in the library he finds Ma cowering in her office. Ma Gnucci dies when the Punisher tosses her out of the office's third-floor window. 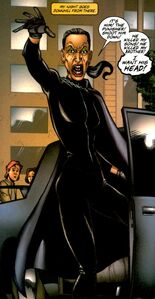 Ma Gnucci before losing all of her limbs. 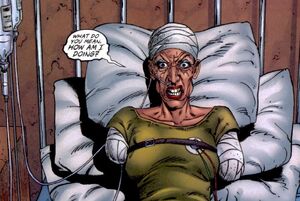 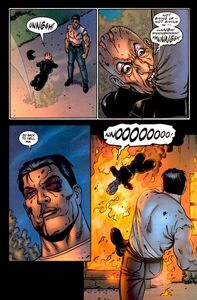 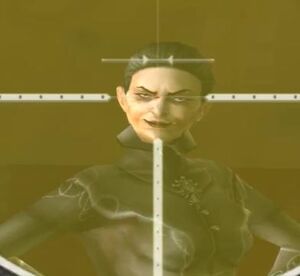