Leader of the Juns
Ruler of Aruk

Command over the Jun

Sacrificing children to his god Ar.

To keep control over the kingdom of Aruk.

Maax is the main villain in the 1982 fantasy film The Beastmaster.

He is portrayed by famous actor Rip Torn.

Maax was the High Priest of Aruk and a cruel fanatic that had no qualms about sacrificing others to further his insidious goals.

In his very first scene, he attempts to sacrifice King Zed's unborn son. As a punishment, he is exiled from the kingdom. In revenge, Maax ordered three of his witch servants to remove the infant from his mother's womb and murder him. One of the witches was about to do that before being killed herself by the local villager. The infant, who had the ability to communicate with animals, was then raised by the village and named Dar.

Many years later, Maax becomes the leader of the barbaric Jun and used them to conquer Aruk, blinding Zed and taking him prisoner. Maax soon establishes himself as a brutal tyrant, massacring citizens, sacrificing their children, and brutally turning citizens into his monstrous Death Guards. While in control of the kingdom, Maax sent the Jun to destroy the village Dar resided in, leaving Dar as the only survivor. Dar sets off to Aruk to avenge his village, accompanied by the eagle Sharak, the ferrets Kodo and Podo, and the black tiger Ruh. He eventually arrives at Aruk, where Maax is sacrificing children to Ar. Dar uses Sharak to rescue one of the children being sacrificed, which the citizens see as a good omen from Ar. Maax, suspicious of Dar, sends his guards to kill him, but they fail. He later sends several slave girls, including Zed's relative Kiri, off to be sacrificed, but Dar rescues them.

Dar, joined by his younger brother Tal and Kiri, infiltrate Maax's temple where Zed is being held. They succeed in rescuing him and lead a rebellion against the kingdom. However, Maax, who had been spying on the rebels, ambushes and captures them. He then prepares to have Zed, Tal and Kiri sacrificed to Ar. Dar, however, arrives to rescue them. In the ensuing battle, Maax reveals to Zed that Dar is his son before slitting his throat. Dar and Maax then battle, with Dar mortally wounding Maax. However, one of Maax's witches heals him, and he attempts to kill Dar while his back his turned. However, Kodo lunges at Maax and tears his throat out, causing him to plummet into his own sacrificial fire, but also at the cost of Kodo's life. 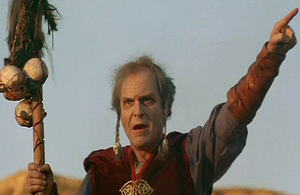 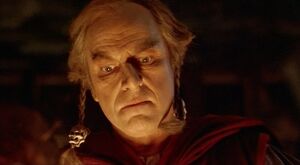 Add a photo to this gallery
Retrieved from "https://villains.fandom.com/wiki/Maax?oldid=2804797"
Community content is available under CC-BY-SA unless otherwise noted.