Villains Wiki
Register
Don't have an account?
Sign In
Advertisement
in: Female, Doctors and Scientists, Pokemon Villains,
and 24 more

Mable is one of five Team Flare scientists in Pokémon X and Y.

She is voiced by Sayuri Hara in the Japanese version, and by Laurie Hymes in the English dubbed.

Mable is one of five Team Flare scientists that are the driving force behind the team, being identified by her blue hair. She is first seen in the Frost Cavern agitating an Abomasnow with two Team Flare Grunts.

Mable makes her first appearance in the X & Y chapter alongside her fellow Team Flare members. She and Aliana are tasked with taking the Mega Ring, which is currently in X's possession. Upon arriving at X's house, they burn it down and trap X into a corner. Y comes in and tries to save her friend, only for Mable's Houndoom to easily defeat her. Before it can finish Y off, X's Kanga saves Y, though she gets badly hurt by Aliana's Pyroar. Seeing all the commotion causes X's baby Kangaskhan, Li'l Kanga, to react to X's Mega Ring, allowing her to Mega Evolve into a Mega Kangaskhan, easily defeating Mable and Aliana's Pokémon, and force them to retreat.

Mable is a blue-haired woman, who wears a red jacket, a red skirt, red shorts underneath, red boots and red gloves. She also wears red goggles. 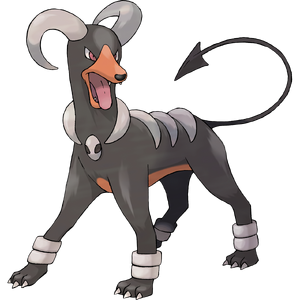