Mother of Darkness
The End of Light

Ruler of the Fifth Reality

Control over all darkness and evil

Mother Mabuka is a character from the 2015 point-and-click puzzle horror game Fran Bow. She is the queen and mother of all things evil and governs over the Fifth Reality, one of darkness and fear. She feeds off of sorrow, fear, and hate. She is also the mother of Remor, the game's main antagonist.

When Fran enters the Fifth Reality to find Mr. Midnight and face Remor, she finds she must awaken Mabuka and get to her heart. Mabuka angrily awakens, but finds she cannot use violence against Fran because a power within her has been awakened. She reveals that Fran was chosen by the Five Realms of Essential Existence to be the "Keeper of the key" by a prophecy that stated that the Keeper would be "haunted by the son of darkness (Remor) after feeding from the red seed (Fran's medicinal pills)". She then opens her heart to allow Fran to find the truth and goes back to sleep.

Mabuka is evil incarnate, so she is very deceptive and violent. She is said to hold hostages and torture them. However, she is affably evil, as she tends to not directly interfere with any who do not intrude upon her domain, wake her, or anger her. She also has a sense of curiosity, as she does legitimately want to know about Fran and her purpose in her Reality.

Mabuka appears as a giant white mask affixed to a wall in Room 103 of her den. She wears a sprawling golden tiara with a ruby attached to the top on top of her head. When she opens her eyes, they are revealed to be red with thin irises. She also has constant streams of blood flowing from her eyes.

Some have also speculated that the fleshy walls and skull-tipped tentacles in Room 103 may also be a part of Mabuka's physical being, as represented by the drawings in León Castillo's journal. 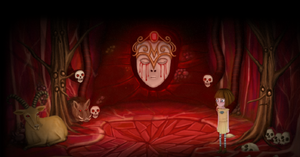 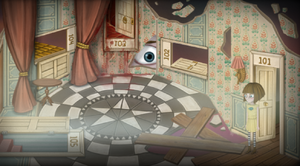 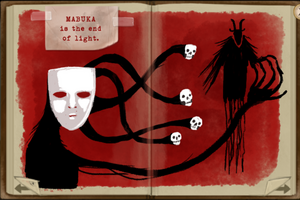 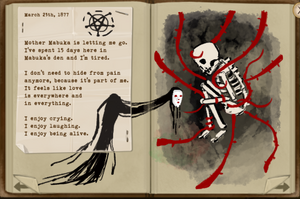 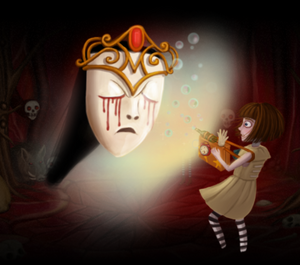 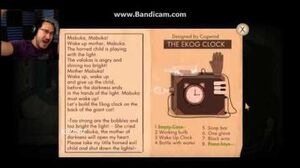 Retrieved from "https://villains.fandom.com/wiki/Mabuka?oldid=3551735"
Community content is available under CC-BY-SA unless otherwise noted.