Mac McGrath is the secondary antagonist in the 2002 Steven Brill film Mr. Deeds. Mac McGrath only cares about his company and loves targeting Longfellow Deeds.

He was portrayed by Jared Harris, who also portrayed Professor Moriarty in Sherlock Holmes: A Game of Shadows, David Robert Jones in Fringe, and Axel Bellman in The Shadow in the North.

Mac is the head of a tabloid station called Inside Access and immediately conspires to slander Longfellow Deeds of Mandrake Falls, New Hampshire when he arrives in New York.

He spins Deeds' heroic and selfless actions to appear villainous, such as when he saves a woman named Carrieta Keely and her beloved cats from a burning building or messing around with John McEnroe.

He also originally assigns a reporter named Babe Bennett to spy on Deeds by pretending to date him, but she ends up genuinely falling in love with him. Later, he conspires with Chuck Cedar, the CEO of Blake Media, to seize control of the company from Deeds. 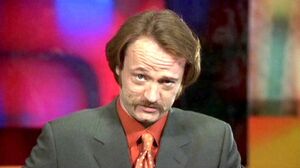 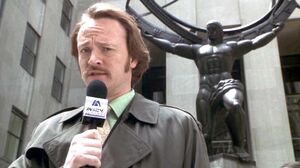 Retrieved from "https://villains.fandom.com/wiki/Mac_McGrath?oldid=3284509"
Community content is available under CC-BY-SA unless otherwise noted.