Help Moro succeed.
Find and steal the Blue Aurum and become the richest rogues in the universe by any means.
Destroy the Galactic Patrol

Pasta Macareni has the look of a typical western outlaw, armed with a Ray Gun that resembles a Colt Revolver and a run down cloth that drapes over his upper body.

Each of them are greedy thugs who are obsessed with money and any other kind of valuables (especially treasures). The siblings like stealing from other worlds and enjoy torturing or killing law officials. They also have a huge hatred of the Galactic Patrol and want to destroy them completely and pledged their loyalty to Moro to get revenge on them and take whatever they want.

Pasta, Penne and Ghetti first appear when they start a train robbery, trying to steal the valuable mineral called Blue Aurum so they can sell it for money and quickly put a stop to the local security who give chase and take them hostage. The Galactic Patrol arrive to stop them and Merus jumps onto the train to face them. Pasta is the only one who fights him and was able to trick Merus into letting his guard down so he can detach a compartment of the train before sending the two down separate tracks. Pasta blows up the track on which Merus is currently riding on but he uses his rocket boots to save himself and his strength was able to slow the compartments down before they fall from the track thus stopping a powerful and deadly explosion.  Merus gives chase to the gang but finds that they are making their getaway upon a spaceship. However, Goku stops the ship in its tracks and the siblings are arrested and taken to the Galactic Prison.

However, after Moro uses his last wish to have all the detainees become free, the siblings join with Saganbo and the other prisoners and head down towards New Namek to side with Moro against the Saiyans and the Grand Supreme Kai.

Pasta is the oldest of the siblings and the most ruthless of the trio. He is also the leader of the trio as he is the most dominant and imperative. Pasta has a huge hatred of the Galactic Patrol and considers them to be a eyesore to his plans and existence. He likes robbing people and hijacking vehicles and other transports to steal rare valuables.

Penne is the middle of the siblings and the only female. She can extend her arms to great lengths like Piccolo and other Namekians. Penne likes jewelry and enjoys taking diamonds from innocent people. She has incredible stretching abilities that she reach anything and seems to be the strongest in combat.

Ghetti is the youngest of the siblings and the shortest of the trio. He is brutal and sadistic as he enjoys torturing his enemies and taking people hostage. Ghetti ican shoot an electric-beam from his hand which wraps around the target and restrains them. He can also create an electric whip to attack his enemies with. 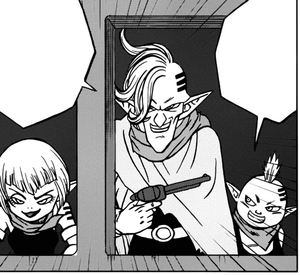 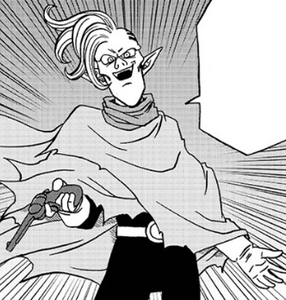 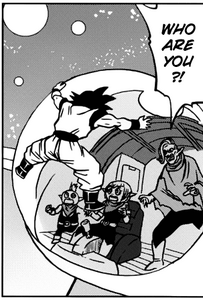 The Macareni Siblings are stopped by Goku.
Add a photo to this gallery

Retrieved from "https://villains.fandom.com/wiki/Macareni_Siblings?oldid=3790884"
Community content is available under CC-BY-SA unless otherwise noted.