Have Old Deuteronomy choose him to have a new life at the Jellicle ball.

Macavity is the main antagonist of the Andrew Lloyd Webber musical Cats. He is a notorious criminal cat and the Jellicle Cats' greatest threat. Macavity also appears as a fictional character who is described in a poem in Old Possum's Book of Practical Cats, by T. S. Eliot.

In the 1998 film adaptation, he was portrayed by Bryn Walters. In the dreadful 2019 adaptation, he was portrayed by Idris Elba, who also played Russell "Stringer" Bell in The Wire, Br'er Wolf in The Adventures of Br'e Rabbit, Charles Miner in the US version of The Office, William Roque in The Losers, Colin Evans in No Good Deed, The Commandant in Beasts of No Nation, Shere Khan in the 2016 The Jungle Book live-action remake, Krall in Star Trek Beyond, Brixton Lore in Hobbs & Shaw and Bloodsport in The Suicide Squad.

Role in the musical

During the first act, two loud crashes then startle the Jellicle Cats as warnings that Macavity is nearby. In the second act, a third crash is heard. Macavity appears with an evil laugh. Macavity's minions throw a net over the Jellicle leader Old Deuteronomy and capture him. As the other Cats try to follow him, Demeter and Bombalurina sing what they know about Macavity. He is a "master criminal" and is never found at the scene of the crime. He is considered the card-cheating Napoleon of Crime. After the song, Macavity returns disguised as Old Deuteronomy, but when Demeter blows his cover, Macavity ends up fighting with Munkustrap and Alonzo. Though Macavity holds his own for a time, the rest of the tribe begin to gang up and surround him, but he shorts out the stage lights as an attempt to escape in the confusion. After the fight, the Rum Tum Tugger suggests that the Cats should find a local magician named Mr. Mistoffelees "the original conjuring cat" for help. Mr. Mistoffelees soon arrives just in time to restore the lights and bring back Old Deuteronomy, earning praise from all the Cats.

In the film, he plays a much larger role. Macavity is both charming and deranged. His minions include Growltiger, Genghis, Bombalurina, Mungojerrie, and Rumpleteazer. He wants desperately to be the Jellicle choice and will stop at nothing to be chosen. He kidnaps all the contestants - Jennyanydots, Bustopher Jones, Gus the Theatre Cat, and Skimbleshanks one by one so Old Deuteronomy will have no choice but to choose him. But Old Deuteronomy tells him that he'll never be the Jellicle choice because he has no soul. In his rage, he takes Old Deuteronomy to Growltiger's ship. But his plans of forcing her to go overboard are thwarted when Old Deuteronomy disappears and is rescued off the ship by Mr. Mistoffelees. At sunup, Macavity, in one last attempt to reach the Heaviside Layer, leaps onto a rope from the chandelier taking Grizabella, but falls onto Nelson's Column. 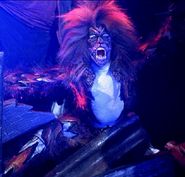 Macavity shorts out the lights.