Take down the government with his comrades (failed).

Defect to the United Anti-Terrorism Coalition and betray The Five Knights (Succeeded).

He was voiced by Chris Jai Alex.

Not much is known about the operative's background, but he would join the United States Army Rangers and was once an ally to Simon "Ghost" Riley, a Special Air Services lieutenant. Mace marked with his body with traditional scars to honor his heritage, and eventually left the army to become a mercenary for hire. He would then join the Jackals, a private military company under the leadership of Viktor "Zane" Metiko after going into the slums of South Africa.

The Jackals would work under the branch of the Allegiance, a faction sent to Verdansk alongside the Coalition to stop the Al-Qatala.

Mace is a featured playable character in Call of Duty: Mobile, being added in 2020 during the season eight "The Forge" release. He is a major character and antagonist in the Mobile comics, where he is a member of the Five Knights.

In the Mobile comics, Mace is a member of the Five Knights, a criminal organization that is made up of the most dangerous terrorists around the globe. He is a member of an unidentified American militia group, and wants to see the downfall of the government. Alongside Vladimir Makarov, Raul Menendez, Gabriel T. Rorke, Édouard "Templar" Couteau, Rott, Sebastian Krueger, and Hidora Kai, the knights are led by the "Fifth Knight" and are tasked with causing disruptions to world governments.

When the United Anti-Terrorism Coalition work on stopping Makarov's plan to target a major city with Nova gas, Mace and Krueger were tasked with stopping them. Mace engages Ghost, fighting in the showers in hand-to-hand until Tank Dempsey arrives and shoots at the mercenary. Mace was forced to retreat alongside Krueger, and later worked on stopping Mara from intercepting Makarov and stopping his plans. At the jungle base, Mace and Mara fight until she holds Makarov at gunpoint, but Mace betrays Vladimir and shoots him in the head before escaping. Before leaving, he launches an EMP missile at the bunker, and the UAC is too late to prevent it from landing. Unbeknownst to Mace or the UAC, Makarov survived the incident by faking his death.

Mace then headed to Alcatraz to meet with Kai, and the two planned to disable all electronic devices across the world, rendering them useless for the Five Knights to attack. While at the Hackney Yard facility, he was confronted by Dempsey, with the two engaging in combat. Mace ends the fight by killing Tank in front of Ghost, who proceeds to beat the mercenary before subduing and arresting him. Mace was then taken to a black site for interrogation, and was afterward was imprisoned for his crimes and for further questioning. The mercenary was later confronted by "Alex" and Mara, who wants to recruit him to help them find and capture Menendez and other members of the Five Knights.

After some convincing, Mace decided to take the deal to be released by General Shepherd after he helped them capture Menendez and the other knights. He then helps "Alex" and Mara infiltrate the Raid, which is Menendez's place of operation after he was rescued by Templar from Charly and her squad. Mace succeeds in apprehending Menendez after "Alex" stops him from escaping via helicopter, and Raul was interrogated by Shepherd and John Price. 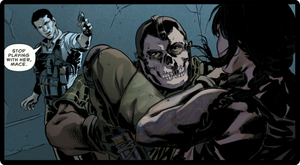 Mace fighting Mara while being criticized by Makarov. 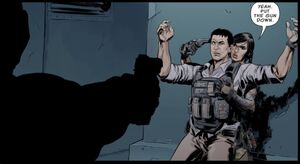 Mace during the standoff.

Mace prepares to shoot Makarov during the standoff. 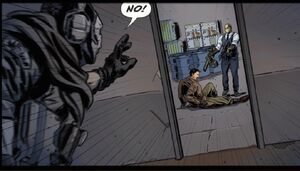 Mace prepares to kill Tank Dempsey in front of Ghost. 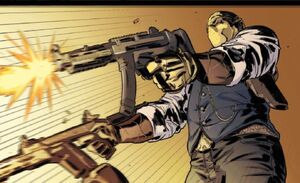 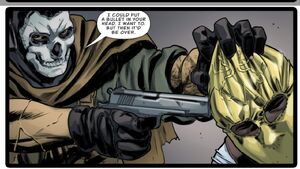