Annex planet Earth into part of its own imperial domain.

The Machine Empire had conquered a number of galaxies before they came to Earth, where they finally found worthy opposition in the form of the Zeo Power Rangers. They sent a number of monsters to battle them, but eventually King Mondo went to fight them himself only to be destroyed by the Super Zeo Megazord. With Mondo gone, Louie Kaboom took control of the empire and though he meant well, he was not the best of leaders and wasted the empire's forces. However Mondo's eldest son, Prince Gasket arrived with his wife, Archerina and overthrew Louie. They proved far better leaders and opponents for the Rangers, even unleashing an all out invasion on Angel Grove. However King Mondo was rebuilt and drove them out, continuing to lead the Machine Empire until Zedd and Rita blew him and the Royal House of Gadgetry to bits with a bomb. Without leaders, the Machine Empire faded into obscurity. However the Royal House of Gadgetry was rebuilt and joined in the United Alliance of Evil's universal invasion. They managed to take control of Aquitar, KO35, and the Phantom Ranger's homeworld, but were destroyed by Zordon's energy wave that emitted from his shattered tube.

Years later, remnants of the Machine Empire resurfaced led by five of its remaining generals. They gathered on the moon where they planned to take control of Zedd's zord, Serpentera, so as to attack the Earth and avenge King Mondo. However ten of the Red Rangers showed up and defeated the other generals, leaving only General Venjix, who entered Serpentera and prepared to begin his assault. However, the Red Wild Force Ranger destroyed Serpentera and Venjix along with it, leaving nothing left of the Machine Empire.

The Royal House of Gadgetry was the nobility of the Machine Empire and its leaders. It consisted of the empire's king, King Mondo, his wife, Queen Machina, their son, Prince Sprocket, and their main servant, Klank and Orbus. They were blown up by a bomb from Lord Zedd at the end of Zeo, but were reassembled by the United Alliance of Evil. However they were completely destroyed by the energy wave Zordon unleashed during Countdown to Destruction.

The Cogs are the mechanized army of soldiers that entirely comprises the Machine Empire ground force. These sophisticated fighting machines are sent down to Earth to battle the Rangers and for espionage and sabotage purposes. They must be either dismantled or short-circuited to be defeated, and they are manufactured at the rate of 1 per hour. Cogs pilot Quadrifighter jets and come in the colors of red or silver body armor.

Cogs are the Machine Empire's highly sophisticated mechanised fighting monsters. These metal contraptions do not know the meaning of surrender. Indeed, in order to defeat them they must be dismantled completely. 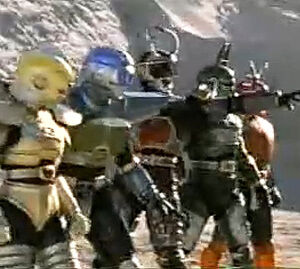 General Venjix and his lieutenants, all that remains of the once vaunted imperial forces.

The Royal House of Gadgetry. 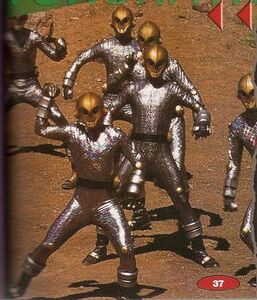 Cogs
Add a photo to this gallery

Retrieved from "https://villains.fandom.com/wiki/Machine_Empire?oldid=4012848"
Community content is available under CC-BY-SA unless otherwise noted.